Manchester City returned to the top of the Premier League table after a goalless draw with Manchester United but the much-hyped clash proved far less eventful than the day’s other local derby.

Sunderland beat bitter rivals Newcastle United 3-0 to escape the bottom of the table, condemning Aston Villa to 20th place just a couple of hours after they sacked manager Tim Sherwood.

United came closest to breaking the deadlock in the closing stages when substitute Jesse Lingard hit the crossbar and defender Chris Smalling forced a smart save from City keeper Joe Hart.

“It was a very tough game for both sides. We were unlucky, they were lucky,” Dutchman Van Gaal told the BBC.

“We had 90 minutes control of the game against a side like Manchester City. I cannot complain. But you want to win and we did not.”

Van Gaal felt aggrieved that his side were not awarded a penalty in the second half following a coming together in the penalty area between United midfielder Ander Herrera and City forward Raheem Sterling.

The United manager said the incident strengthened calls for the introduction of video technology.

“We should have had a penalty on Ander Herrera,” he said. “It is easy to see for me but I have a replay. The referee has one second.

“I always say we need the modern technology but I am the only one in the desert calling for it.”

Elsewhere Juergen Klopp was denied a first victory in charge of Liverpool when Sadio Mane scored a late equaliser for Southampton before being sent off in a 1-1 draw at Anfield.

Tottenham Hotspur’s Harry Kane retured to goal-scoring form after a lean spell for his club with a hat-trick in the London club’s 5-1 romp at Bournemouth.

City have 22 points from 10 games, the same as Arsenal, while United are in fourth place with 20 points. 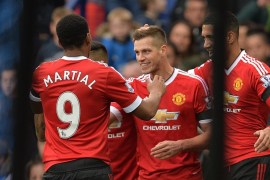 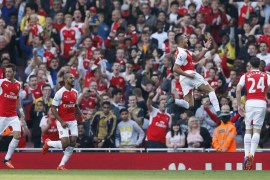 All three goals came in the opening 19 minutes of the match as Arsenal leapfrog United into second.