Chelsea manager Jose Mourinho was banished from the dugout and midfielder Nemanja Matic was sent off the pitch as the Premier League champions lost 2-1 at West Ham United who climbed to second in the table.

Mauro Zarate put the Hammers ahead after 17 minutes before Matic was dismissed just before halftime for a second yellow card.

Referee Jon Moss ordered Mourinho to the stands at the interval before Gary Cahill equalised for Chelsea after 56 minutes, but substitute Andy Carroll won it for the hosts with a 79th-minute header.

Chelsea are 15th with 11 points while in the other afternoon kickoffs West Bromwich Albion won 1-0 at Norwich City and Watford were 2-0 victors at Stoke City.

Meanwhile, Olivier Giroud and Laurent Koscielny headed Arsenal to a 2-1 victory over Everton and go top of the Premier League.

It was Arsenal’s fourth consecutive Premier League victory and came at the end of a week when the Gunners raised morale by stunning Bayern Munich with their first Champions League win of the season.

Jamie Vardy scored for a seventh consecutive Premier League game to give Leicester a 1-0 victory over Crystal Palace.

Vardy made it nine goals in seven games for the Midlands club, pouncing on a wayward pass by defender Brede Hangeland and rounding the keeper to score in the 59th minute.

Palace striker Wilfried Zaha was yellow-carded in the closing stages for a dive after tangling with Christian Fuchs.

The win keeps Leicester firmly in the hunt for a place in next season’s Europa League, with Palace four points behind. 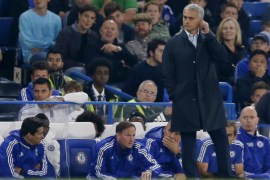