The former deputy general secretary of Fifa is the fourth official candidate for the election, which is scheduled to take place on February 26.

“I sent my application letter and eight nomination letters to FIFA on Monday night,” Champagne, a French former diplomat, told The Associated Press in an interview ahead of launching his bid for football’s top job on Friday.

Champagne’s detailed document includes plans to modernise how the embattled governing body is run, fight inequality – including cuts to European places at FIFA and the World Cup – and to trial the use of video review to help referees.

Champagne campaigned for the previous election, won in May by his former boss and ally Sepp Blatter, but did not get the required backing of five members to be a candidate.

Platini, who helped force Champagne’s exit from FIFA in 2010, is suspended by the FIFA ethics committee and unlikely to be accepted as a candidate. The UEFA president is appealing against his ban for taking a $2m salary payment nine years after he worked as Blatter’s personal adviser.

Blatter, who is also suspended for paying Platini from FIFA funds in 2011, called the election amid a deepening corruption crisis in June. He announced his planned exit just four days after winning re-election despite FIFA then being subject to American and Swiss criminal investigations of bribery and suspected money-laundering.

Champagne gets a second chance to lead FIFA because of the scandals.

“The difference is all that has happened since May 27,” he said, recalling the day two FIFA vice presidents were among seven officials arrested at hotels in Zurich and FIFA offices were raided for evidence.

“[Voters] want someone who knows how FIFA functions – for the good and for the bad,” said Champagne, who was not linked to personal corruption during and since his 11 years working at FIFA. “It’s a unique opportunity to restore FIFA and to continue what has been done correctly in 111 years.”

Champagne chimed with current ideas to reform FIFA by suggesting a 12-year limit on all elected positions, quotas to ensure women are represented on all football bodies worldwide and “open and competitive” bidding for all commercial contracts.

Development in poorer football nations is another priority, and Champagne has long argued against Europe’s concentration of wealth and players from across the world.

Up to 10 new FIFA member nations could be accepted, from Caribbean and Pacific islands and Kosovo, where Champagne has advised football officials since leaving FIFA.

Champagne also met with Issa Hayatou, the interim FIFA president from Cameroon who can influence many of the 54 African voters.

“We have to accept that continents are not united,” said Champagne, who cautioned against seeking bloc votes from FIFA’s six confederations.

Champagne said he sent spent “a little less than” 50,000 euros ($55,000) of his own money on the first campaign, and does not yet have major financial backers lined up. He pledged transparency in identifying any that come forward. 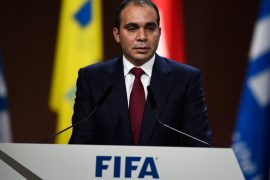 Jordanian was the only candidate who stood against Blatter in May’s presidential elections.