Real Madrid took a big step towards finishing top of Champions League Group A game when they held Paris St Germain to a 0-0 draw in the French capital as both teams remained unbeaten.

French champions PSG enjoyed most of the possession but took an over-cautious approach and injury-hit Real had the best chances through Cristiano Ronaldo and Jese in the first half.

The Spanish 10-time European champions stayed top of the group with seven points from three games and lead PSG on goal difference, with the reverse fixture to come in Madrid in two weeks time.

Elsewhere, Anthony Martial went from villain to hero as his second-half equaliser earned Manchester United a deserved point against CSKA Moscow in Champions League Group B.

The French teenager conceded a first-half penalty, but popped up with a fine header to make it 1-1.

The visitors started well but fell behind on 15 minutes after Martial was correctly adjudged to have hand balled in the penalty area.

Roman Eremnko’s spot-kick was brilliantly palmed on to the post by David de Gea, but the ball rebounded into the path of Seydou Doumbia who had the easiest of finishes.

Niguez opened the scoring with a back-heel finish after a run by Yannick Carrasco following a corner in the 23rd minute. Martinez then fired home in the 29th and Torres lobbed the goalkeeper in the 63rd.

The fourth goal came when Astana defender Denys Dedechko turned the ball into his own net while trying to clear a cross in the 89th.

The victory at the Calderon Stadium in Madrid leaves Atletico with six points from three matches in Group C, level with Benfica, which lost 2-1 at Galatasaray. 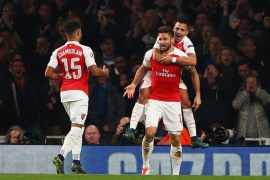