Julian Savea scored his second hat-trick of the tournament as reigning champions New Zealand routed France with a record 62-13 victory to set up a Rugby World Cup semi-final against the Springboks.

In a repeat of the 2011 final, the All Blacks ran in nine tries for the biggest win in the knockout stages at a World Cup with the biggest score conceded in a test by France.

Their reward is a match against fellow Southern Hemisphere superpower South Africa, who beat Wales 23-19 in the first quarter-final, at Twickenham next Saturday.

Winger Savea’s triple took his tally to a record-equalling eight for the tournament and there was a brace for Tawera Kerr-Barlow with further tries from Nehe Milner-Skudder, Brodie Retallick, Jerome Kaino and Kieran Read.

“Tonight we turned up and showed that when you couple attitude with skill, you can do certain things.”

French flair flickered briefly but the dominant All Blacks quickly snuffed out hopes of an upset to match those of 1999 and at the same stage in the same stadium in 2007, the only time New Zealand have failed to reach the last four of a World Cup. 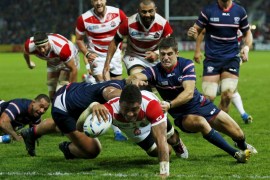 USA beaten 28-18 but Japan’s stunning campaign finishes with a third-place finish in the group.