Manchester United bounced back from its drubbing against Arsenal to beat Everton 3-0 at Goodison Park.

Former Everton striker Wayne Rooney sealed the win for Manchester United shortly after the hour, with his first away goal in 11 months, after Morgan Schneiderlin and Ander Herrera had given the visitors a half-time lead.

Elsewhere, Arsenal scored three second-half goals as they thrashed Watford to move back into second.

Their Chile winger Alexis Sanchez put them ahead after 62 minutes and further goals followed in quick succession from Olivier Giroud and Aaron Ramsey as Watford crumbled.

With striker Sergio Aguero injured, Sterling picked up the scoring duties by putting City ahead with a tap-in in the seventh minute and Bony added the second four minutes later.

While Glenn Murray pulled one back for Bournemouth in the 22nd, Sterling restored the two-goal lead with a superb solo effort in the 29th, dribbling past two defenders in the area before slotting a low shot into the net.

He completed his hat-trick on the stroke of half-time and Bony netted his second in the 89th as City maintained its two-point lead of crosstown rival Manchester United.

Meanwhile, Chelsea returned to form in the Premier League with a much-needed 2-0 victory over Aston Villa at Stamford Bridge.

After a tentative start from both sides, Jose Mourinho’s team took the lead through Diego Costa.

The result will ease pressure on Mourinho, whose side now has its third win from nine games, but his counterpart Tim Sherwood has not led Villa to a win since the first game of the season. 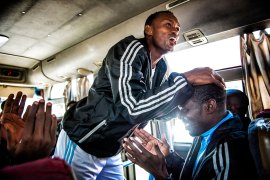