World number one Novak Djokovic continued his recent dominance over Rafa Nadal when he beat the Spaniard in the final of the China Open to win the tournament for the sixth time.

The Serbian showed no mercy against world number eight Nadal, who was hampered by a foot problem in the second set, as he cruised to a 6-2 6-2 victory at the National Tennis Centre in the Chinese capital.

Djokovic has now beaten Nadal in seven of their last eight meetings, dating back to the 2013 China Open, and is on the verge of levelling their head-to-head record.

The pair have played each other 45 times with Nadal hanging on to a 23-22 advantage.

Djokovic has never been beaten at the China Open, winning 29 matches in a row, and six titles in total.

The 28-year-old has now 56 career titles, eight of them this year, including the Australian Open, Wimbledon and US Open grand slam crowns.

Muguruza won a hard-fought final 7-5, 6-4 to capture her first Premier Mandatory title and climb to fourth in the world rankings.

It was just the 22-year-old’s second WTA title, after she won her first at last year’s Hobart International, and made up for the frustration of losing her two previous finals this year, at Wimbledon in July and Wuhan last week.

“For me, to be able to come and win the tournament after losing in the finals of Wuhan last week is a great achievement,” she said at the trophy presentation.

“It’s amazing, and I can’t wait to come back and defend my title next year.”

Muguruza turned 22 a few days ago and became the youngest player to win a title at this level or higher since a 21-year-old Petra Kvitova captured the WTA Finals crown in Istanbul in 2011. 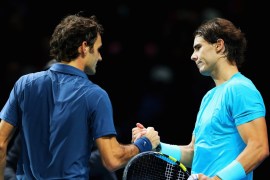