Sky News on Wednesday quoted a close friend, Klaus Stoehlker, who has advised Blatter in the past, as saying the committee made the ruling pending further investigations by the Swiss attorney general.

The Guardian reported that the decision still needs to be ratified by the adjudicatory chamber of the ethics committee led by German judge Hans-Joachim Eckert.

The ethics committee is discussing the Swiss criminal investigation against Blatter at a meeting in Zurich lasting until Friday, committee member Abdoulaye Makhtar Diop confirmed in the Senegalese capital Dakar.

The ethics committee is also looking into UEFA president Michel Platini, who was questioned as a witness by Swiss prosecutors over a payment of $2m made through Blatter in 2011.

‘Hypocrite and a liar’

Earlier, FIFA presidential contender Chung Mong-joon called Blatter a “hypocrite and a liar” and said he is planning to sue the outgoing president for at least $100m.

“Mr Blatter is a hypocrite and a liar,” Chung, a member of the FIFA executive committee until 2011, said in a speech in London. “I plan to sue Mr Blatter on his embezzlement in court.”

Chung said his legal actions would be launched in the Swiss courts, and pledged to return any damages to FIFA.

“My understanding is the amount of money I can claim against President Blatter is in proportion to the amount of damage he inflicted on FIFA,” Chung said.

“FIFA has become a corrupt organisation serving the interests of a few,” the South Korean added.

Chung is facing a suspension by the FIFA ethics committee for breaches relating to South Korea’s failed bid for the 2022 World Cup and for openly criticising the investigation. Chung calls it an attempt by FIFA to undermine his candidacy to replace Blatter, and he said he plans to pursue a separate legal case to ensure he can stand in the February election. 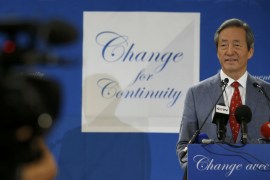 South Korea’s Chung Mong-joon reads out nine-page statement with charges against him but denies wrongdoing. 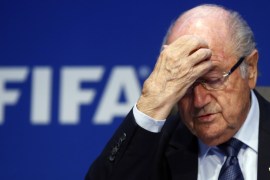 FIFA still putting on a show

The entertainment provided by the FIFA saga could very well be turned into a Hollywood blockbuster.