South Korea’s Chung Mong-joon has said he is facing a 15-year suspension by FIFA’s Ethics Committee that has ‘sabotaged’ his campaign for the FIFA Presidency, but he denied any wrongdoing and vowed to continue his bid to lead football’s world governing body.

Speaking at a news conference in Seoul on Tuesday, Chung read out a nine-page statement, addressing the charges against him, which he dismissed as a ploy ‘to prevent me from running for the President of FIFA’.

Chung said he was being charged with violating six articles from FIFA’s Code of Ethics, which he said stemmed from his ‘support’ for South Korea’s 2022 World Cup bid and his proposal to launch a Global Football Fund (GFF).

“The fundamental reason why I am being targeted is that I aimed straight at the existing power structure of FIFA,” Chung said.

“All that the ethics committee is relying on is that I have not fully ‘cooperated’ or ‘collaborated’ with the investigation and that I had violated ‘confidentiality’ requirements.”

Bound by confidentiality rules, FIFA’s Ethics Committee has not made any statements on Chung’s case and there was no immediate response to his comments on Tuesday.

Chung said his proposals for the establishment of a GFF were in line with FIFA’s rules at the time and had already been investigated and cleared.

He provided copies of two letters, dated 10 November 2010 and signed by former FIFA Secretary General Jerome Valcke, stating that FIFA agreed the integrity of the bidding process had not been affected so the matter was deemed closed.

“Yet the Ethics Committee has now asked for 15 years of sanction for this,” Chung said.

“With the campaign season starting, even issues that had been closed many years ago, have a way of being revived.”

Chung, a 63-year-old billionaire who previously served as a FIFA vice-president, formally announced in August that he was running for the FIFA presidency.

The incumbent, Sepp Blatter, is to stand down in February.

Blatter has run FIFA for the past 17 years and recently become the focus of a criminal investigation but has denied any wrongdoing and has not been charged.

Chung has been heavily critical of Blatter, saying from the outset that he feared his own presidential campaign would be undermined, describing the Ethics Committee as Blatter’s “hitman”.

A week later, Swiss prosecutors opened a criminal investigation into Blatter on suspicion of mismanagement and misappropriation of funds.

Some of football’s major sponsors have since issued calls for the immediate resignation of Blatter but the 79-year-old has responded by saying he would not quit.

Lawyers say Blatter, currently being investigated by Swiss authorities, tells his staff he has done nothing wrong. 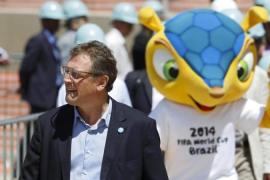 Jerome Valcke dramatically suspended and placed under investigation over allegations of involvement in a ticketing scam.