World number one Serena Williams has opted to pull out of the WTA Finals and end her season early following a roller coaster campaign that has taken its toll on her body, the American said.

Williams will miss next week’s China Open and the WTA wrapup event in Singapore.

The American was said to have been devastated when she lost a US Open semi-final last month to Roberta Vinci which denied her a rare calendar-year grand slam after she had won the Australian Open, French Open and Wimbledon.

Williams, who will finish the season on the top ranking spot, used her health as reason for her early departure.

“It’s no secret I’ve played injured most of the year – whether it was my elbow, my knee, or, in the final moments after a certain match in Flushing [Meadows],” she said in a statement.

“I’m a fierce competitor and I want to compete as well as I can, for as long as I can.

“So I am taking a proactive step and withdrawing from tournaments in Beijing and Singapore to properly address my health and take the time to heal.”

There has been no suggestion that Williams might face a fine for a lack of effort over her decision.

By contrast, the ATP has threatened Andy Murray with serious sanctions if he misses the men’s season-ending tournament in London in November to prepare for Britain’s Davis Cup final with Belgium in Ghent.

Williams has been trying to bury her heartache in recent weeks, appearing at the New York fashion shows and fronting up for a restaurant opening in Canada with reported rapper boyfriend Drake.

She called her decision “very difficult, but one ultimately made because of the love of the game. I plan to return to practising and participating in exhibition matches later this year”.

The 34-year-old lost only three matches of 58 played in 2015 and will stand number one for the fifth season in succession. 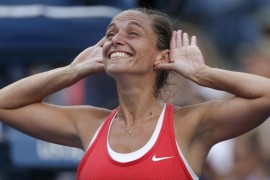