Asia’s football chief has admitted there is groundswell of opinion in the west of the continent that Australia’s membership of the confederation has not worked out and they should be kicked out.

Australia will play South Korea for the Asian Cup on Saturday after what is widely regarded as a successful hosting of the tournament, the second time they have reached the final in three attempts since switching from Oceania in 2006.

“There are indications that confirm that there is a desire among west Asian federations to remove Australia from the AFC,” he told the paper. “But I also know that the Arabs are not the only ones that are not convinced with the value of Australia staying within the Asian football family.”

Critics of Australia’s move to Asia, a switch aimed at securing more competitive football and an easier route to the World Cup, say the benefits have been all one way.

The Socceroos have reached the last two World Cups through Asian qualifying, while the Arabian Gulf, which had one team in soccer’s showpiece event from 1990 to 2006, was not represented in South Africa or Brazil.

Asia has four automatic qualifying spots for the World Cup with a fifth country getting a shot at the finals through an intercontinental playoff.

Bahraini Al-Khalifa, who took over the AFC in 2013, said no mechanism had been put in place to review Australia’s membership when it was agreed in 2005.

“There are several Asian federations that see that it is necessary for Australia to leave the AFC, and for the AFC to cut all ties with Australia, but we can’t just base any decision on opinions.

“Any decision about Australia’s membership will have to come from the general assembly.”

Al-Khalifa released a statement on Friday saying Australia had earned its place in Asia by “working diligently” and contributing to the confederation at all levels.

“This effort includes development work among AFC member associations, administration through the various AFC committees and economic benefits through the commercialisation of AFC’s broadcast rights in Australia,” it read. 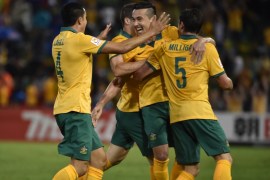 Hosts score two goals in opening 14 minutes to win second semi-final; Will face South Korea for the title on Saturday. 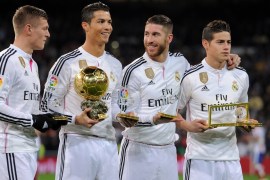 Football’s world governing body reveal that $4.1 were spent on annual transfers in 2014.