Maria Sharapova showcased all of her canny experience and brutal efficiency as she gave Eugenie Bouchard a 78-minute tennis lesson to advance to the Australian Open semi-finals.

The 20-year-old Bouchard reached the last-four in Australia and France as well as the Wimbledon final in 2014 but was no match for Sharapova, who showed she was not ready to be usurped by the younger generation just yet in a 6-3, 6-2 victory.

The 27-year-old has now beaten the Canadian in each of their four meetings, three of which have been at grand slams, and set up a meeting with 10th-seeded compatriot Ekaterina Makarova for a place in the final.

Sharapova will take on Ekaterina Makarova for a place in the final.

The 10th-seeded Russian, who made her maiden grand slam semi-final at the US Open last year, leaped on Romanian Halep’s serve, breaking her twice in the first set and three times in the second to roar to a 5-0 lead.

A shell-shocked Halep was utterly overwhelmed and meekly surrendered the match by crunching a backhand wide of the tramlines after 69 minutes. 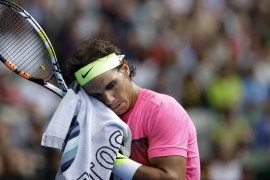 Berdych knocks Nadal out of the Australian Open

Czech ends 17-match losing streak to the Spaniard third-seed; Will face Murray for a place in the Aus Open final.