The IOC shot down a suggestion by a Saudi Arabian official that the nation could seek to co-host the Olympics with neighbouring Bahrain by having male and female athletes compete in separate countries.

Prince Fahad bin Jalawi Al Saud, an international relations consultant to the president of the Saudi Arabian Olympic Committee, told a French Olympic website that resolutions passed by the IOC last month open the door for a possible joint bid with men’s events on Saudi territory and women’s competitions in Bahrain.

But IOC President Thomas Bach quickly dismissed the idea in a statement to The Associated Press, saying Saudi Arabia would be ineligible to bid for the Olympics unless it complies with rules barring discrimination against women in sports.

“A commitment to ‘non-discrimination’ will be mandatory for all countries hoping to bid for the Olympics in the future,” Bach said.

“This was made very clear in the Olympic Agenda 2020 reforms and will even be in the host city contract. If this is not applied, the bid would not be admissible. Countries like Saudi Arabia must really work to allow female athletes to freely participate.”

Saudi women are largely unable to access sports, including in public schools where physical education is not on the curriculum for girls. The Gulf country sent two women to the Olympics for the first time at the 2012 London Games.

However, the Saudis sent a male-only team to last year’s Asian Games in Incheon, South Korea.

Fahad said in an interview with the Francs Jeux website published on Monday that a Saudi-Bahrain joint candidacy would be allowed under the Olympic Agenda 2020 reform package approved by the IOC in Monaco. 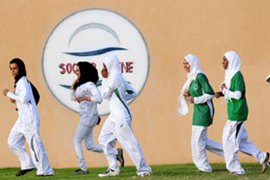 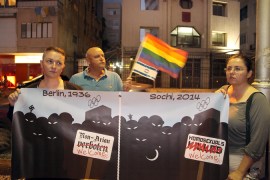