Tomas Berdych played arguably the grand slam quarter-final of his life to end the longest losing streak on the ATP Tour with a 6-2, 6-0, 7-6 victory over Rafa Nadal and advance to the Australian Open semi-finals.

Berdych, who beat the virtually unstoppable and then six-time champion Roger Federer in the Wimbledon quarter-finals in 2010, had not beaten Nadal in 17 successive matches, tied for the record as the longest losing streak to another player.

The seventh-seed started like a runaway train against the 14-times grand slam champion forcing him deep behind the baseline and painting the tramlines as every shot he went for seemingly came off.

Berdych will take on Britain’s Andy Murray for a place in the final.

Murray ended the hopes of local tennis fans, and one teenager in particular, with a no-nonsense performance to reach his fifth Australian Open semi-final after a 6-3, 7-6, 6-3 victory over Nick Kyrgios.

The 19-year-old’s quarter-final appearance at the season opening grand slam had created a media frenzy in Australia despite it competing with the Socceroos’ Asian Cup semi-final against United Arab Emirates scheduled for the same time.

Murray, however, refused to let the off-court hype distract him as he produced a clinical effort to take the Rod Laver Arena crowd out of the equation, improve his record against Australian opponents to 11-0. 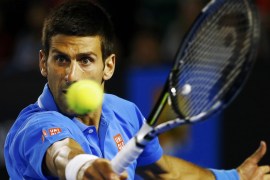