The 29-year-old American admits to being “bigger than the average girl” in a competition that combines explosive power, flexibility and endurance – propelling a 4kg iron ball as far as possible.

A three-time national champion and two-time Olympian, Carter finished fifth at London 2012 but is used to verbal abuse. It does not concern her performances, but her body.

“I’m used to people looking at me and going, ‘Oh, that’s a whole lot of woman right there,'” Carter told Al Jazeera.

She recalls a sightseeing trip to New York’s Central Park last year along with Olympic champion Valerie Adams and a group of female discus competitors.

“People were just staring at us as we were walking. We knew we were a group of big girls, but we still wondered why. And then this one guy pulled over in his car and asked, ‘Excuse me, is there some kind of show in town or some kind of circus?’

“That illustrates how narrow-minded some people are.”

Carter tells her story with a mix of incredulousness and amusement.

“I think there’s something about bigger women which almost scares some people. I think a lot of guys feel slightly intimidated by it.”

She giggles as she shares the comments she receives whenever she goes clothes shopping.

“I have these big old thighs and so I have to get everything tailored or buy different sizes for different things and people are always going to look at you because you’re not what they consider the norm.”

Carter laughs about it now but when she was a young, emerging athlete, such comments were hard to deal with psychologically.

“You want to enjoy being you. And sometimes people take that away from you, make you self-conscious, and that can become an issue you carry with you for the rest of your life.”

The turning point in her life came when she developed a thyroid problem that saw her weight increase by 36kg. At the same time, she learned to accept her body for what it was.

“It changed my body completely. And of course it hurt my feelings. No one wants to gain weight if they’re not trying, especially if you’re an athlete. But it really made me think about accepting my body and appreciating it for what it is.”

Not the only one

Carter’s stories are no isolated tales. Many female shot putters have experienced relentless bullying while growing up. Rachel Wallader, Britain’s top shot putter, is no different.

“Throughout my teens I was constantly told I had ‘big arms’ or ‘manly legs’,” Wallader said.

“I remember being called ‘Shrek’ at school along with many other names and comparisons. And it did make me very conscious. As I’ve matured and become more successful, I haven’t been as bothered. Now I’m proud of my physique and what it’s allowed me to achieve, even if it does make it difficult to shop … “

Carter points out that the fixed stereotypes surrounding what’s considered feminine and athletic are particularly unfair. They fail to take into account the drastically different demands various sports place on the human body, as well as the myriad of different natural body types, she adds.

“[The] majority sees feminism as being slim. But I think muscles can be beautiful. My body requires something different than the average person. And I’m willing to make the sacrifices I need in order to be the best.

“Plus I’m a girly girl. I always have been. Sport hasn’t taken that away from me. Before a big competition, I always go to get my hair done, my nails done, put some fake lashes on and that’s how I will go out to compete.”

Wallader is used to hearing that female shot putters are “butch and manly”. But she feels that too much attention is placed on the muscularity of some athletes in the sport and not the endless hours spent training flexibility and endurance.

“People should respect the hard work involved, even if we don’t fit their idealistic body image.”

Both Wallader and Carter feel that the level of negativity female shot putters experience varies considerably with culture and knowledge about the sport. Carter recalls meeting Olympic champion Adams for the first time while competing at the World Junior Championships.

While swapping stories, they realised that they both experienced uncomfortable moments growing up, which ultimately drove them to the sport.

“We’d both been the tallest person in the classroom since the third grade. But once you get through that awkward stage and you realise this is what I have, you seek out something you can make your own.

“Shot put isn’t always considered an event for women, but when you’re able to do it and you’re good at it, it becomes yours. You can empower yourself through it.”

Both Carter and Wallader have found that success as an athlete provides some immunity to the jibes and stares. After competing internationally, Wallader says she has started to receive some comments from people wishing they had certain aspects of her body.

But more than anything, they believe confidence is the biggest weapon of all.

“I don’t care if I’m not everybody’s cup of tea. There are seven billion people in the world. Not everyone has to like you.” 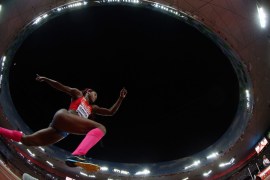 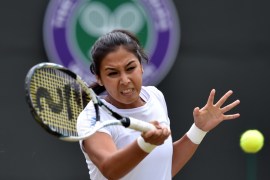 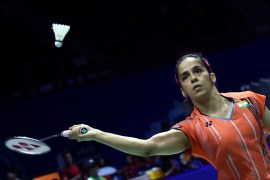