Middle-order batsman Umar Akmal hit an unbeaten 38 from 28 balls as Pakistan wrapped up the two-match Twenty20 international series against Zimbabwe with a 15-run win at the Harare Sports Club.

After electing to bat on a slow pitch, Pakistan posted 136 for six in their 20 overs, the same total they managed in Sunday’s first match when they won by 13 runs.

Zimbabwe never got going in their reply having slipped to 24 for four in the seventh over, and finished on 121 for seven from their 20 overs.

Akmal was one of the few batsmen who got to grips with the conditions as he worked the ball around superbly, scoring just 14 of his runs in boundaries.

Seamer Luke Jongwe was the pick of the home bowlers with two for 24 from his four overs, including the wicket of experienced opener Mohammad Hafeez (17).

Zimbabwe made a disastrous start to their reply but were steadied by a 60-run partnership for the fifth wicket between Sean Williams (40 not out) and Pakistan-born Sikandar Raza (36).

Despite having wickets in hand going into the final four overs, Zimbabwe found boundaries hard to come by with slow left-arm bowler Imad Wasim (one for 14 in four overs) and paceman Mohammad Irfan (two for 25) especially hard to get away.

The teams start a three-match one-day international series at the same venue on Thursday. 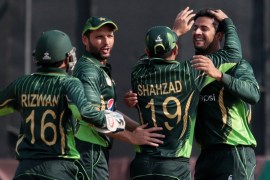 Left-armer picks up four wickets as Zimbabwe go down in the opening match.