A second-string Australia ran in 11 tries to hammer Uruguay 65-3 at Villa Park and ease to the top of Rugby World Cup Pool A ahead of their crunch encounters with England and Wales.

The twice former champions, who opened their campaign with a 25-13 victory over Fiji on Wednesday, made hay in the bright Birmingham sunshine to score five tries before halftime and secure the bonus point.

Two tries in five minutes at the start of the second half from winger Drew Mitchell, his 11th and 12th at World Cups, gave the Australians the points differential they needed to ease ahead of Wales, conquerors of England the previous evening.

Flyhalf Quade Cooper converted only five of the tries and did nothing for his chances of replacing Bernard Foley in the number 10 shirt for next week’s clash with England by spending 10 minutes of the match in the sin bin for a high tackle.

In his absence, Uruguay had their best moments of another brave performance but were only able to produce a single penalty goal from flyhalf Felipe Berchesi in the 23rd minute.

Outstanding Wallabies openside flanker Sean McMahon had already opened the scoring off the back of a rolling maul in the seventh minute and winger Joe Tomane scored the first try by an Australian back at the tournament three minutes later.

After Mitchell’s double strike, which helped to subdue the Uruguayans after their bright start to the second half, McCalman and man-of-the-match McMahon also grabbed second tries to push Australia over the 50-point mark.

Centre Matt Toomua added the 10th try after Cooper showed what he can do against tired opponents with a searing break up the middle in the 70th minute.

Uruguay’s desperation to get a try on the board saw them camped on the Australian line for much of the last 10 minutes but the final word went to the Wallabies with a try from replacement back Tevita Kuridrani. 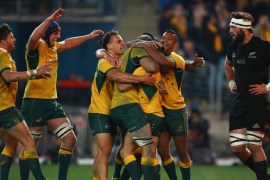