Rising Swiss star Belinda Bencic beat Denmark’s Caroline Wozniacki to storm into the final of the Pan Pacific Open, where she will face Poland’s Agnieszka Radwanska.

Bencic defeated Wozniacki 6-2 6-4, her fourth win in a row over the former world number one, to reach her fourth WTA final since June.

If the 18-year-old wins, she will break into the world’s top 10 rankings for the first time.

“It’s amazing to be in the final,” she said in her on-court interview.

“Caroline’s a great player. If you give free points or aren’t focused enough, she comes back and plays great shots and great tennis.

“So I knew I had to be focused well from start to finish today. And I was playing some very good games on my serve — I tried to not let her break me.”

Wozniacki was the top seed for the event but had no answer for Bencic, who won her first WTA title at Eastbourne in June then followed up by winning the Canadian Open in August.

Radwanska, chasing her first WTA title in more than a year, joined Bencic in the final with a 6-4 6-1 win over Slovakia’s Dominika Cibulkova, who upset Ana Ivanovic to reach the semis but ran out of steam.

Cilbulkova made a strong start, racing to a 4-2 lead, but Radwanska then reeled off 10 of the next 11 games to clinch a straight-sets victory. 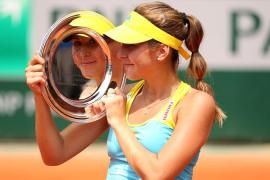 Belinda Bencic is the next Swiss Miss

Bencic has improved 350 places since April 2013 and is blossoming under the guidance of Hingis’ mother.