Mercedes had started at the front of the grid in each of the last 23 Grands Prix, dating back to the middle of last year, and needed just one more to equal the all-time record, set by the Williams team in the early 1990s.

But the Silver Arrows pairing of Lewis Hamilton and Nico Rosberg were unable to keep up with the Ferrari and Red Bull teams, who staged their own high-speed battle for pole.

Vettel came out on top, giving Ferrari their first pole position since 2012 with a masterful lap around the floodlit Singaporean track.

The German, a three-time winner in Singapore when he was with his previous team Red Bull, continued his love affair with the tricky street circuit by setting the fastest qualifying time of one minute 43.885 seconds.

Vettel’s pole position was the 46th of his career. His last was in 2013, when he was with Red Bull.

The 28-year-old was more than half a second clear of Australia’s Daniel Ricciardo, who booked his spot on the front row for Red Bull with the second best time.

Hamilton, who had started from pole in 11 of the previous 12 races this season, could only manage fifth spot, with Rosberg starting alongside him in sixth. 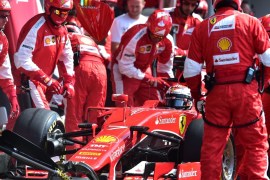 Four-time Formula One world champion went from third to 10th after a penultimate-lap tyre blowout.