Flavia Pennetta topped off one of the most surprising US Open women’s tournaments ever with a shock announcement – that she was retiring from tennis after completing her greatest victory.

The stunning announcement came just after Pennetta, 33, beat fellow Italian and childhood friend Roberta Vinci 7-6(4) 6-2 to win her maiden grand slam singles title and become the first Italian winner ever at the US Open.

“Before I start this tournament one month ago I take a big decision in my life,” she said before hoisting the trophy and accepting the $3.3m winner’s cheque.

“This is the way I would like to say goodbye to tennis. I’m really happy. Is what all the players seem to want to do, to go out with this big trophy home.

“And so this one was my last match at the U.S. Open and I couldn’t think to finish a better way.”

Compatriot Vinci had reached her maiden grand slam final after beating top-seed Serena Williams who was two wins away from a historic calendar slam.

In the second grand slam doubles final of the year for both pairs, Australian Open runners-up Herbert and Mahut finally collected their first trophy after breaking Murray and Peers on a sensational rally of close-range volleys at the net.

For Murray and Peers it was more disappointment after losing in the Wimbledon men’s doubles final in July.

It was a long overdue success for the 33-year-old Mahut who has suffered numerous near misses over the years having lost 11 times at grand slams to the eventual champions, including on five occasions at the US Open. 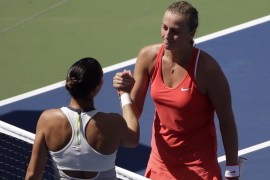