Roger Federer dominated France’s Richard Gasquet in a 6-3 6-3 6-1 scamper into the semi-finals of the US Open.

Federer seemed intent on beating the rain that was forecast to hit Flushing Meadows as he safely stormed into the last four, where he will face fellow Swiss Stan Wawrinka.

Federer and Gasquet both employ one-handed backhands, but apart from that elegant stroke there were very few similarities.

Federer, 34, could hardly miss and Gasquet all too often played the role of innocent bystander in the 87-minute mauling.

The Swiss maestro uncorked 50 winners to a mere eight from Gasquet and the record 17-times grand slam winner has been looking like a new, improved, revitalised model of late.

“Since a few years now, or many years, I have tried to look at the big picture to hopefully still be playing at a high level at this age,” Federer said.

“I have been able to take the ball earlier, and I think I’m volleying better than I have the last 10 years.”

Meanwhile, Wawrinka, pushed off Arthur Ashe Stadium court to Louis Armstrong because of unsettled weather,  did his part to wrap up action quickly brushing past the overwhelmed 15th seed in just one hour, 47 minutes.

Anderson lacked the energy he displayed in a fourth-round upset of third seed Andy Murray, allowing the Swiss to dictate play for large stretches of the match.

The South African, who relies heavily on his serve, managed just nine aces and one break chance the entire match, which he could not convert. 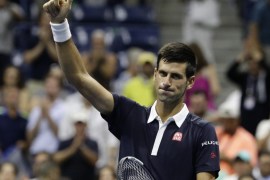 US Open: Djokovic to meet Cilic for place in the final