Serena Williams kept her bid for a calendar-year grand slam on track, powering past big sister Venus 6-2 1-6 6-3 to move into the US Open semi-finals.

The Williams sisters had met 26 times before but never with so much riding on the result.

A win by Venus would move her a step closer to a first grand slam since 2008 Wimbledon but would scuttle Serena’s chances of joining their sport’s most exclusive club of calendar-year grand slam winners which comprises just three members, Maureen Connolly, Margaret Court and Steffi Graf.

“She’s the toughest player I ever played in my life and the best person I know,” said Serena in an on-court interview.

“So it’s going against your best friend and at the same time going against the greatest competitor for me in women’s tennis, so it was really difficult today.

“When I’m playing her, I don’t think of her as my sister, because she’s playing so well, hitting big serves and running a lot of balls down.”

The contest featured more intensity and emotion than in most of their other matches. Serena stared at the court and rarely looked up to make eye contact with her sister until the match was over and the sisters shared an embrace at the net.

The 33-year-old top seed, winner of 21 grand slam singles titles, took charge of the opening set by securing service breaks in the fifth and seventh games after a brilliant start by Venus.

However, Venus in the second set looked more like the player who has claimed seven grand slam singles titles, unleashing her power and drawing groundstroke errors from Serena for two service breaks that sent the match to a deciding third set.

Serena seized control early in the third and rode the momentum to the finish and a final four meeting with unseeded Italian Roberta Vinci.

Italian Vinci needed a similar gritty effort to see off another player from France, Kristina Mladenovic, 6-3 5-7 6-4 on another sizzling hot day at Flushing Meadows.

A doubles specialist with a career grand slam on her resume, Vinci finally cracked the solo code to move onto the final four in singles at a major for the first time in her 18-year career. 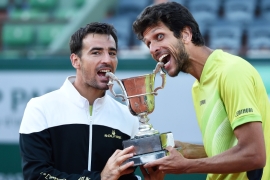 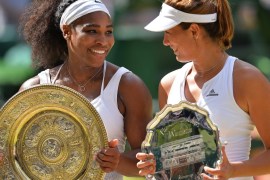