Pakistan’s hopes of hosting its first international home series since 2009 took a massive blow when Zimbabwe government advised its team against touring over security fears.

At least 43 people were killed and many more have been wounded in an attack on a bus in the Pakistani city of Karachi on Wednesday.

Zimbabwe Cricket sent a press release confirming the suspension of the tour but another email quickly followed confirming that discussions were “ongoing and the final position will be announced as and when”.

“We have consulted on the security situation in Pakistan with particular reference to your intended cricket tour of the country and have been advised that it would not be safe for the team to travel to Pakistan at this point in time,” the initial email quoted Sports and Recreation Commission director-general Retired Colonel Charles Nhemachena as saying to ZC CEO.

Sri Lanka were the last Test team to play a series in Pakistan but their tour was cut short when their team bus was attacked by armed men close to Lahore’s Gaddafi Stadium in 2009.

Pakistan have since played their home series mostly in the UAE. 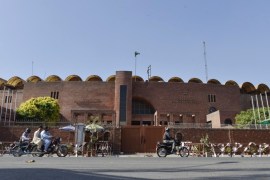 Zimbabwe confirm short tour of Pakistan, the first by a Test-playing nation since 2009.