The entire US men’s sprint relay team has been stripped of its silver medal from the 2012 London Olympics as a result of Tyson Gay’s doping case.

The letter asks the USOC to collect the medals and return them to the IOC.

“As expected, following USADA’s decision in the Tyson Gay case, the IOC today confirmed that the US team has been disqualified from the 4x100m race that was part of the athletics competition at the London 2012 Olympic Games,” USOC spokesman Patrick Sandusky said in a statement.

“We will begin efforts to have the medals returned, and support all measures to protect clean athletes.”

Gay returned his own medal last year after accepting a one-year doping suspension and the loss of results going back to July 2012, but the status of the US second-place finish in London and the medals of Gay’s relay teammates had remained in limbo until now.

Gay tested positive for steroids at the US championships in 2013.

He received a reduced suspension – rather than a two-year ban – because he cooperated with the US Anti-Doping Agency’s investigation that led to an eight-year ban for his former coach, Jon Drummond.

Under international rules, an entire team can be disqualified and stripped of medals because of doping by one member.

If the London medals are reallocated, the silver will go to Trinidad and Tobago and the bronze to France. 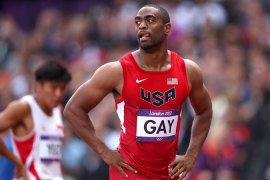 US sprinter Gay gets one-year ban

Former world champion Tyson Gay is banned by the US Anti-Doping Agency and returns his 2012 Olympic silver relay medal.