Barca, chasing a fifth Spanish league title in seven years, thrashed Getafe 6-0 at the Nou Camp on Tuesday and have a two-point advantage over their arch-rivals with four matches remaining.

Champions Atletico Madrid stayed on course to secure third place and an automatic spot in the Champions League when Fernando Torres came off the bench and scored a thrilling breakaway goal to clinch a 1-0 win at Villarreal.

Torres nicked the ball away from a defender near the halfway line 16 minutes from time, sped towards the penalty area and rounded goalkeeper Sergio Asenjo before slotting into the net.

Barca have 84 points, with Real on 82 and Atletico 75, six ahead of Sevilla, who won 3-1 at La Liga debutants Eibar to climb above Valencia into fourth.

Valencia can reclaim Spain’s fourth Champions League berth, which carries a place in qualifying for Europe’s elite club competition, if they avoid defeat at mid-table Rayo Vallecano on Thursday. 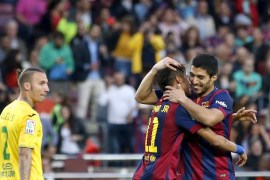 Messi, Suarez and Neymar go past 100 goals for the season as La Liga leaders march on.