Bangladesh whitewashed Pakistan in an ODI series for the first time after winning the third match by an emphatic eight wickets.

Bangladesh went into the match having already achieved a first ODI series win against Pakistan, and made more history.

Opener Soumya Sarkar struck his maiden century as Bangladesh raced to 251-2 in the 40th over, after bowling out Pakistan for 250 in 49.

Fellow opener Tamim Iqbal, who hit consecutive centuries in the last two matches, made 64 to take his run tally to 312, the highest for a Bangladeshi in any bilateral series, and the third highest in any three-match series.

Tamim hit eight fours and one six in his 76-ball innings.

Tamim and Soumya shared 145 in their opening stand, to set the platform for Bangladesh’s 10th clean sweep in its history.

Mushfiqur Rahim joined Soumya to pile the misery on the listless Pakistani bowling attack. They shared an undefeated 97-run partnership, and Rahim fittingly hit the winning boundary off Junaid.

Azhar’s maiden century came off 111 balls, hitting 10 to the boundary. He shared in two significant partnerships before Bangladesh hit back.

Azhar and fellow opener Sami Aslam, on debut, combined for 91. 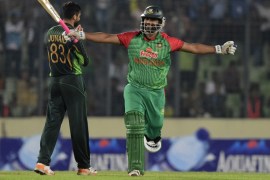