By
Ngagne Diouf
Dakar, Senegal – A wrestling bonanza is generating public unease in Senegal as large pots of prize money and the sport’s soaring popularity is encouraging a growing number of boys to drop out of school to seek stardom in the arena.

Blanket media coverage and the chance for victors to escape poverty by earning up to $300,000 per contest has fired up the passion for the sport to dizzying levels, with the country’s grandees now joining the spectator.

But concern is growing that the youth are abandoning their education and jobs for a shortcut to fame without any guarantees of success, and observers point out that only a handful ever make it to the top in painfully short careers.

Boys are leaving school in the fifth or sixth grade with others turning their back on low-paid vocations as mechanics, tailors, welders, masons, and carpenters to jump on the wrestling bandwagon.

“Almost all wrestlers have abandoned their original jobs to enter the arena,” said Oumar Diarra, secretary-general of the national sportswriters’ association.

Early in the morning young wrestling hopefuls swarm across sand dunes on the outskirts of Senegal’s capital, Dakar, to train in pursuit of an often elusive dream of wealth in a country where 54 percent of people survive below the poverty line .

At least 8,000 unemployed and disadvantaged boys registered with the CNG, the governing body of wrestling in the country. They see the sport as a potential route to success, according to Thierno Ka, the organisation’s deputy chairman.

“The pursuit of money trumps all other motives for their association with the sport,” Ka said.

It is hardly surprising: A wrestler can earn between  $250,000  to $300,000  for a bout, with the high stakes now attracting ministers, politicians, businesspeople, music celebrities and sports stars to stadiums.

These sums are a far cry from the sport’s roots in villages where men fought for local honour until wrestling became big business in the late 1990s as the exploits of Mohamed Ndao Tyson – styled after US boxer Mike Tyson – paved the way to lucrative bouts.

Anthropologists link the sport closely to the country’s traditional culture and fans, journalists, and tourists are drawn to spectacular bouts that begin with the national anthem , sometimes sung by stars such as Youssou N’Dour .

Promoters, brand managers, broadcasters, corporations and politicians have all cashed in, mindful of the media coverage fuelling the sport’s popularity and commercial potential.

Abou Ndour, editor of a wrestling newspaper, explained: “With the development of the media, sponsors are falling over themselves to secure visibility for their products or brand names.”

Everyone appears to be winning: Athletes’ managers claim 10 percent of the prize money, television channels and radio stations jostle for broadcasting rights, and hawkers sell T-shirts, flags and other gadgets promoting the wrestlers.

But perhaps the main beneficiaries are the marabouts – a local wrestling term for witch doctors or seers – who charge huge sums of money for magical potions or amulets to ensure victory for their “clients”.

“Marabouts are the speculators of the mysticism in wrestling,” said Ibrahima Sow, an anthropologist at Dakar University’s Fundamental Black Africa Institute.

Wrestling in Senegal can often run in the family with fathers passing on their skills to sons or brothers, most of whom can neither read nor write French, the country’s official language.

Former wrestler Meissa Diaw, who fought under the name Boy Kaire and holds the country’s record for triumphant bouts with 26 wins and 13 defeats, stood aside for his son, 22-year-old Diene Kaire.

I knew I had little chance to succeed in school, so I turned to wrestling as a career.


“At 43, I realised I could no longer support the hard training the sport requires, so I decided to quit,” Meissa told Al Jazeera. “I did not want to stand as a mental impediment to Diene.”

Like many retirees, he now works as a bouncer in a luxury casino in Dakar while managing the “Green Berets” club which trains 37 boys.

Physically well-endowed and confident of success, Diene dropped out of school after only four years in order to wrestle, and has won seven contests and lost two since his professional debut in 2011.

“I knew I had little chance to succeed in school, so I turned to wrestling as a career,” he said. “I was really motivated by my father’s guidance and the opportunities in the sport.”

Like many other wrestlers, Diene has travelled to the United States to prepare for fights, and within three years of pocketing his first $200 for a contest, his market value has jumped to thousands of dollars – a world away from his father’s first earnings of $10 in 1984.

Yet many wrestlers remain wilfully blind to the fact that only a handful of them will ever become stars in the course of their short careers, and bouts can be hard to come by.

In the 2012-13 season, there were just 623 tournaments of wrestling without throwing punches, with only 730 athletes locking horns in fights that permit punching.

“If I have no contest this year, I will travel to Japan for business,” said Lac de Guiers II, who has recorded two successive draws and one loss.

Ibou Cissé, alias Battling Siki, joined those who have moved to rugby because he only had two fights in two years.

Although the longer a wrestler’s run of success, the larger his fan-base and the greater his earning power, sickness or injury can cut short their livelihoods.

CNG chairman Dr Alioune Saar advises wrestlers to train for a parallel trade as their careers can change dramatically in the aftermath of an illness or injury.

“Many of them will have little chance to earn millions in this sports because promoters would offer derisory sums to small-time wrestlers,” he said. 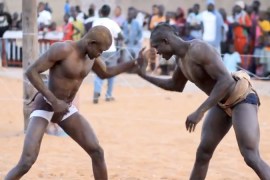 We follow the story of five young Senegalese men competing for the chance to become professional wrestlers. 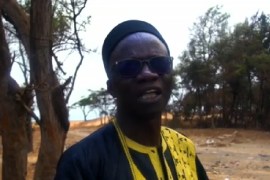 Muslim leader urges practitioners to abide by Islamic edicts of fighting pollution and preserving the environment.