A week out from the French Open, Serena Williams is one victory away from winning her fourth consecutive title this year.

The top-ranked American overcame an early break of her serve to ease past Romanian qualifier Simona Halep 6-3, 6-0 Saturday and reach the Italian Open final, extending her career-best winning run to 23 matches.

After being pushed to three sets in his previous two matches, against Latvian qualifier Ernests Gulbis and fourth-seeded David Ferrer, Nadal appeared back in his comfort zone against Berdych.

Nadal’s final opponent will be either Roger Federer or 36th-ranked Benoit Paire of France, who were playing a night match at the Foro Italico.

Williams’ only title at this clay-court event came in 2002, when she beat Justine Henin in the final. That was also the year she won her only French Open title. Last year in Paris, Williams lost in the opening round of a major for the first time, falling to 111th-ranked Virginie Razzano of France.

Roland Garros starts next Sunday. “I love the clay. I haven’t had many wins at Roland Garros but I do love it. I love to slide,” Williams said. “My goal is just to win a match there this year.”

Martina Navratilova established the longest women’s win run in the Open Era at 74 matches in 1984.

‘Unhappy with some things’

At 31, Williams is back at the top of her game after missing 11 months in 2010 and 2011 with a right foot injury and a pulmonary embolism.

The 64th-ranked Halep entered with an impressive run herself, having beaten former top-10 player Daniela Hantuchova to qualify and then ousting 2009 French Open champion Svetlana Kuznetsova in the first round. That was followed with wins over fourth-seeded Agnieszka Radwanksa, 13th-seeded Roberta Vinci and two-time Rome winner Jelena Jankovic.

Solid on both sides and an agile mover, the 2008 French Open girls champion took a set off Williams in their only previous meeting in the second round of Wimbledon two years ago. Halep tested Williams again at the start of this match, angling baseline shots to the corners to force the 15-time Grand Slam winner into errors.

Halep broke to take a 2-1 lead in the first set, but Williams broke right back and cruised from there as she gained the measure of her opponent and began to win the longer rallies.

Williams went directly to the practice court after winning. “I was unhappy with some things today,” she said. “I want to do well here as well as (in Paris).”

It’s Azarenka’s first final since beating Williams for the title in February at Doha, Qatar. That followed her Australian Open victory. Since then, Azarenka has been slowed by right ankle and left foot injuries.

Errani reached last year’s French Open final and was the first Italian semifinalist in this tournament since Raffaella Reggi won the 1985 event in Taranto.

Azarenka did well to take the crowd out of the match early on, and never trailed in the second set. 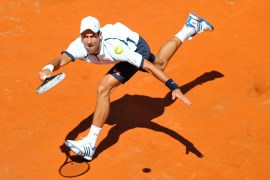 Djokovic tumbles out of Italian Open

World number one stunned by Tomas Berdych in Rome quarters as Nadal struggles past Ferrer and Serena cruises. 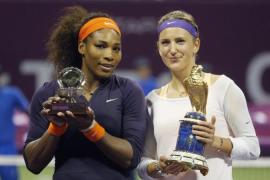 World number one Serena Williams follows Victoria Azarenka out of the Dubai Championships with lower back injury.