Former England football captain John Terry has unexpectedly ended his nine-year international career on Sunday, quitting before he was due to face a racism hearing because his place in the team had become “untenable”.

Despite being cleared in court of racially abusing Queens Park Rangers defender Anton Ferdinand during a Premier League match last year, the Chelsea defender was facing a lengthy ban if found guilty by a Football Association panel this week.

“I have always given my all and it breaks my heart to make this decision,” Terry said.

The 31-year-old Terry became the first England player to be stripped of the captaincy twice when he was fired in February ahead of the criminal trial.

But he was allowed to keep playing for the national team, making his 78th – and last – appearance against Moldova in World Cup qualifier earlier this month after being cleared in court.

“I am making this statement today in advance of the hearing of the FA disciplinary charge because I feel the FA, in pursuing charges against me where I have already been cleared in a court of law, have made my position with the national team untenable,” Terry said.

But Terry has no plans to stop playing for Chelsea, where he has spent his entire career.

“I now look forward to playing for Chelsea FC, and challenging for domestic and European honors,” he said. “And I want to thank the fans and the club for their continued support.”

Chelsea published a statement on its website announcing the move, saying: “This was a personal and difficult decision for John to take as playing for and captaining his country was a boyhood dream.”

Chelsea stood by Terry throughout his high-profile trial in July, with chairman Bruce Buck attending every day at Westminster Magistrates’ Court.

During four days of evidence, prosecutors claimed Terry snapped in response to insults about an alleged extramarital affair and racially abused Ferdinand. But Terry said all he did was sarcastically repeat the offensive term that he was accused of using.

The magistrate who ruled on the case said in his judgment that Terry’s explanation was “certainly under the cold light of forensic examination, unlikely”.

Terry was found not guilty of a racially aggravated public order offense after the magistrate decided it was “impossible” to be sure what the player said.

There is a lower burden of proof for the FA charge, however, potentially putting England’s football authorities in a difficult position about whether Terry could have played for the national team again.

Terry made his England debut in 2003 against Serbia and Montenegro, and was one of the team’s star performers in the run to the European Championship quarterfinals in June ahead of his trial.

“I would like to thank the England managers who have selected me for my 78 caps,” Terry said. “I have had great pleasure in sharing that honor with all the players that I’ve played with.

“I would like to thank them, the fans and my family for their support and encouragement during my international career. Representing and captaining my country is what I dreamed of as a boy and it has been a truly great honor.”

The defender’s career has been mired in controversy during the past two years. Terry was first stripped of the England captaincy before the 2010 World Cup following allegations he had an affair with the former girlfriend of teammate Wayne Bridge, who quit the national team.

After being reinstated a year later, Terry lost the England captaincy again when his racism trial was delayed until after Euro 2012.

Fabio Capello quit as England coach as a result, unhappy that Terry lost the captaincy against his wishes. 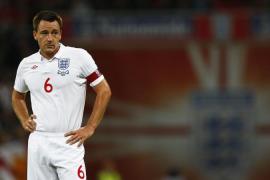