It was the 50th win for Nadal at the spiritual home of clay court tennis since he first competed here as an 18-year-old in 2005.

His only defeat came in the fourth round in 2009 when he lost to Robin Soderling of Sweden in a fourth round match.

This year Nadal is bidding to become the first player to win seven French Open titles, moving him out of a tie with Swedish legend Bjorn Borg. A win on Sunday would also be his 11th Grand Slam title, level with Borg and Rod Laver.

In the end Almagro went the way of so many others over the course of the last seven years, but he gave a solid account of himself especially in a hotly-disputed first set.

“I was lucky in the last set. He had a few opportunities on my serve to have a break, then with my second or third chance I managed to close the match,” Nadal said.

On another cool, overcast Parisian afternoon, games went with serve in the opening set until 6-6 with Almagro, who won the Nice clay court title in the week before Roland Garros, dominating Nadal at times.

In the ensuing tie-break though Nadal jumped out into a winning 4-0 lead on the back of some brutal hitting down both flanks and Almagro showed the first signs of wear and tear after just over an hour of play.

He held firm till the fourth game of the second set, but then finally crumbled on serve in the face of another assault from Nadal’s hammerblows. Nadal held serve to make it 4-1 and already the writing was on the wall for Almagro as he moved inexorably onwards toward an eighth defeat in eight matches against his fellow 26-year-old.

The 12th seed did conjure up a break point in the seventh game, but Nadal snuffed that out with a big swinging first serve. A game later it was two sets ahead for Nadal as Almagro was broken for a second time.

Nadal took the first game of the third set before rain stopped play for a few minutes. Almagro then let slip two further break points in the fifth game to trail 2-3. The axe fell on Almagro shortly after as Nadal broke him in the seventh game and then served out for the win.

Nadal’s drive into the final four has come at the cost of just 30 games. 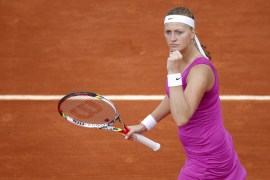 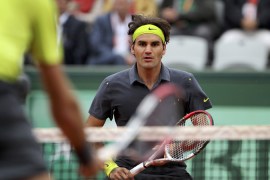 World number number one advances to semi-finals at Roland Garros as Federer comes from behind to beat del Potro. 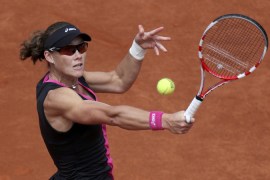