For the first time since her debut appearance at the All England Club 15 years ago, five-time winner Venus Williams failed to get past the first round of Wimbledon.

The seven-time Grand Slam champion was eliminated 6-1, 6-3 by Elena Vesnina of Russia at Wimbledon on Monday, the latest setback in her return to tennis after being diagnosed with an energy-sapping autoimmune disease.

Williams, who has fallen to 58th in the world rankings, lost the first five games on Court 2 to the 79th-ranked Russian and, although she picked up her game and fought hard, was never able to turn the match around.

It was the fourth time Williams has lost in the opening round of a Grand Slam – the first at Wimbledon since her debut in 1997.

“I feel like I’m a great player,” Williams said.

“I am a great player. Unfortunately I have to deal with circumstances that people don’t have to deal with normally in a sport, but I can’t be discouraged by that. I’m up for challenges. I have great tennis in me. I just need the opportunity.”

There were no opening day troubles for top-ranked Novak Djokovic, six-time champion Roger Federer and No. 1 Maria Sharapova, who all enjoyed easy straight-set wins on a cloudy but dry start to the two-week grass court championships.

Defending champion Djokovic beat former No. 1 Juan Carlos Ferrero 6-3, 6-3, 6-1 in the day’s first match on Centre Court, while Sharapova came on next and overpowered Anastasia Rodionova 6-2, 6-3.

Federer, seeking his record-tying seventh Wimbledon crown, dropped only three games in trouncing Spain’s Albert Ramos 6-1, 6-1, 6-1 on Court 1 – the first time since 2003 that he wasn’t assigned to Centre Court for the opening round.

“I played a very clean match from start to finish,” Federer said.

“It’s always nice to save energy.”

Playing in her 16th straight Wimbledon, the 32-year-old Williams was unseeded for the first time since 1997. This was her first opening round loss at a Grand Slam since the 2006 Australian Open, and she was coming off a second-round loss at the French Open to Agnieszka Radwanska.

Williams revealed in late August at the US Open that she had been diagnosed with Sjogren’s syndrome, an autoimmune condition that can cause fatigue and joint pain. She skipped the Australian Open in January, before returning to the tour in March in a bid to earn a berth on the US Olympic team for the London Games.

“I’ve been through a lot for years without knowing what I was going through,” she said.

“It’s all a culmination at the end of the day. I just try to stay positive and focus on the tennis. I’m tough, let me tell you – tough as nails.”

Williams has been champion or runner-up at the All England Club eight of the past 12 years, with her last title coming in 2008. The three losses in finals all came against younger sister Serena.

Djokovic, meanwhile, made a smooth transition to grass after his loss in the French Open final to Rafael Nadal.

In keeping with tradition, the defending men’s champ got the honour of opening play on Centre Court.

Djokovic, bidding for a sixth Grand Slam title, was broken in his second service game as he slipped behind the baseline on break point and couldn’t return the shot. But he held serve the rest of the way, losing only nine points on his first serve and finishing with 13 aces.

Sharapova, who won the French Open last month to complete a career Grand Slam, picked up right where she left off at Roland Garros. She thoroughly dominated the 133rd-ranked Rodionova, a Russian-born Australian, to win in just over an hour.

Sharapova, who won her first Grand Slam title here in 2004 at the age of 17 and lost in last year’s final to Petra Kvitova, had 22 winners to just seven for her opponent and finished the match with an ace down the middle.

In men’s play, eighth-seeded Janko Tipsarevic beat 2002 runner-up David Nalbandian 6-4, 7-6 (4), 6-2 on Court 1. It was Nalbandian’s first match since he was defaulted in the final at Queen’s Club for kicking an advertising board and injuring a line judge.

“I think everybody understood (it) wasn’t a good thing that I did, but (I) was very unlucky, as well,” he said.

In early women’s matches, third-seeded Radwanska and Grand Slam champions Sam Stosur and Li Na won in straights sets to move into the second round. Radwanska, who has twice reached the quarter-finals at Wimbledon, beat Magdalena Rybarikova of Slovakia 6-3, 6-3 in the day’s first match on Court 2. The Polish player will next face Vesnina.

The first seed eliminated was No. 16 Flavia Pennetta, who fell 6-4, 6-3 to fellow Italian Camila Giorgi. 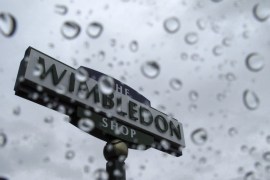 The ‘art’ of keeping the tournament running, whatever the weather. 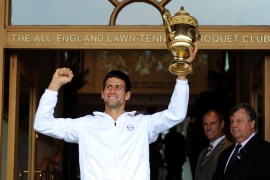 The All England Club announces there will be a 10 percent rise in the prize fund for the 126th edition of grand slam. 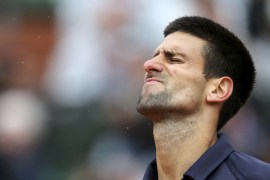