Chelsea cleared the final hurdle in a season of never-ending challenges when they beat Bayern Munich 4-3 on penalties in the German team’s Allianz Arena stadium to be crowned European champions for the first time on Saturday.

In what may be the final act of his Chelsea career, Didier Drogba sealed victory in a tension-packed Champions League final with the last kick of the shootout to clinch victory after he had headed Chelsea’s equaliser two minutes from time to force a 1-1 draw and send the game to extra time.

Bayern, just as in 1999 when they lost 2-1 to Manchester United who scored two goals in stoppage time, were within touching distance of the cup thanks to an 83rd-minute header from Thomas Mueller.

But history came back to haunt them as Drogba snatched victory from their grasp with a late equaliser to set up his team to victory against all the odds.

Even in extra time Bayern had a golden opportunity to seal the win but Arjen Robben’s penalty was saved by Petr Cech after Drogba fouled Franck Ribery to concede the spot kick.

Bayern skipper Philipp Lahm even won the toss to decide which end the shootout would take place and it was held in front of the Bayern fans.

Chelsea’s success, built on the millions invested in the club over the last nine years by Russian billionaire Roman Abramovich, came on another night of unlikely glory in a season that seemed to be going nowhere under coach Andre Villas-Boas who was sacked in March.

Chelsea were rejuvenated by interim coach Roberto Di Matteo who not only steered them to this success but also won the FA Cup two weeks ago.

Whether he gets the job permanently remains to be seen, but there is little more he could have done to prove he is the man for the job.

He ended the campaign not only with the two cups, but also making Chelsea the first London club to win the trophy since the competition began 57 years ago and guaranteed to play Champions League football again next season.

The match itself was similar to Chelsea’s astonishing semi-final victory over Barcelona with both successes built on solid steel rearguard actions against sides that dominated them territorially and with possession of the ball.

The Barcelona victory followed Chelsea’s win over Napoli in the Round of 16 when they lost the first leg 3-1 in Italy and came back to win 4-1 in the second leg, a result that ultimately set them on the road to their success in Germany.

At the end the German players were utterly stunned, none more so that Bastian Schweinsteiger after his poorly struck penalty hit the post.

“I believe a lot in destiny,” Drogba said. “It was written a long time ago. This team is amazing and I dedicate this cup to all the managers and players we had before.

“(My equaliser) changed the game. Life is fantastic.”

Bayern were left to rue a third near-miss this season after finishing runners-up in the Bundesliga and the German Cup but this was the harshest of blows.

For much of a compelling final, the match resembled a defence versus attack exercise as Bayern poured forward, only to be denied by a wall of blue or their own wastefulness in front of goal.

Both Thomas Muller and Mario Gomez snatched at clear chances as Chelsea rode their luck and manned the barricades as they did in the Nou Camp during their semi-final against Barcelona.

Muller lashed one volley wide from Franck Ribery’s cross while the disappointing Gomez showed a surprising lack of composure on several occasions.

Substitute Ivica Olic had his head in his hands in the second period of extra time as he prodded a volley agonisingly wide of the post with Cech helpless.

The night still seemed to be heading Bayern’s way when they moved 3-1 ahead in the penalty shootout after Juan Mata missed Chelsea’s first spot kick but Olic missed for Bayern and when Schweinsteiger struck the post the stage was left for Ivorian Drogba to write his name into Chelsea folkore. 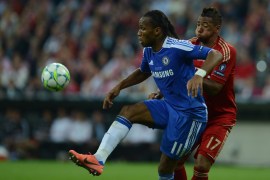 In Pictures: Kings of Europe