Livorno’s Piermario Morosini has died after collapsing on the pitch with a suspected heart attack during an Italian Serie B match at Pescara on Saturday.

Morosini, a former Italy under-21 international on loan from Serie A side Udinese, fell to the ground with no one around him in the 31st minute.

He got up looking confused and then collapsed again as medics and then an ambulance came onto the field.

The player had been conscious when put in the ambulance but his condition was said to be serious when he arrived at hospital.

“He looked me in the eyes when he entered the vehicle,” Pescara chief executive Danilo Iannascoli told Sky television.

“Morosini fell, he tried to get back up but fell again. Our masseur realised what was happening.”

The Serie B game was abandoned with Livorno leading 2-0.

“We have done everything possible to save him but he never regained consciousness,” doctor Leonardo Paloscia told reporters.

All Italian Serie A and B games this weekend have been postponed, ANSA news service quoted Italian football federation director general Antonello Valentini as saying.

At Pescara, Iannascoli also said the ambulance was blocked from coming onto the pitch due to a vehicle parked in front of an exit, leading to players carrying Morosini on a stretcher out to the ambulance.

Pescara goalkeeper Luca Anania said: “There were moments of great confusion and I tried to understand what was happening, also with regard to the delay of the emergency services.

“They said the ambulance couldn’t come onto the pitch because the entrance was blocked by another car.

“Some of my team-mates carried the stretcher to the ambulance.”

News agency ANSA said the car blocking the exit was a police vehicle, but a heart specialist said the delay made no difference.

“A minute more or less in the ambulance would not have done anything,” said the cardiologist Dr Paloscia.

“His heart had stopped and never started beating again.

“We tried to reanmiate him for an hour and a half but it was all to no avail.”

Italian media were alerted to Morosini’s death initially by an “explosion of shouts and tears” from his team-mates who had come to the hospital, ANSA said.

At the San Siro on Saturday, Milan at first said there would be a minute’s silence for Morosini.

But then the public announcer told fans already in the stadium that the game would be postponed along with all other remaining Serie A matches and the rest of the weekend’s Serie B. There was applause but also some whistles.

He spent more than an hour with no heartbeat before making a remarkable recovery in hospital, sparking hopes of a full recovery. He is due to leave hospital on Friday.

Muamba’s collapse on March 17 raised fears that he would become another entry in the grim list of professional footballers who have died playing the game, the most high-profile being Marc-Vivien Foe.

The 28-year-old Cameroon midfielder, who played for West Ham United, Manchester City and Lyon, died after collapsing during a Confederations Cup semi-final against Colombia in Lyon in June 2003.

The captain of Spanish club Espanyol, Dani Jarque, died of heart failure on August 8, 2009 during a tour of Italy. Jarque, 26, had trained in the morning but collapsed in his hotel room in Coverciano.

On Saturday the Italian Olympic Committee (CONI), which confirmed Morosini had suffered a cardiac arrest, announced in a statement that all other sporting events this weekend would hold a minute’s silence. 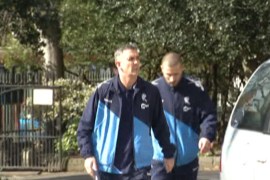 Al Jazeera’s Lee Wellings reports from outside the hospital where Bolton’s Fabrice Muamba is in a ‘critical condition’.