Europe has produced the greatest comeback in Ryder Cup history to reel in USA and retain the trophy at the Medinah Country Club in Illinois.

Trailing by 10-6 going into the closing 12 singles, Jose Maria Olazabal’s men thrillingly won the first five matches out and went on to make sure of victory when Martin Kaymer defeated Steve Stricker 1 up in the penultimate match on Sunday.

He clinched it with a six-foot putt at the last, 21 years after his fellow German Bernard Langer missed from a similar distance to hand victory to the US at Kiawah Island.

That gave the Europeans the 14 points they needed to make sure of keeping the small, golden trophy for another two years, and then minutes later Tiger Woods missed a four-footer at 18 against Francesco Molinari to hand overall victory to Europe 14 1/2 to 13 1/2.

“This is indescribable,” Kaymer said.

“I was so nervous in the last two or three holes. Olazabal came up to me on the 16th and told me we needed my point to win the Ryder Cup. I loved that feeling. Loved it.

“You cannot compare the pressure of winning this to winning my major. I won that for myself. But today I could hear my team and hear all the people. My season hasn’t been good but today I made a huge step for my confidence.”

The Americans had started the 12 closing singles 10-6 ahead and needing just 4 1/2 points to win the cup for just the second time in the last decade, the other time being at Valhalla, Kentucky four years ago.

They got to that position by dominating the foursomes and fourballs play on Friday and Saturday, taking two sessions 3-1 and splitting the two others 2-2.

Jose Maria Olazabal’s team were left with the mammoth task of winning eight out of the 12 singles to put the overall match score at 14-14, thus ensuring Europe retained the cup as holders.

No European side had ever managed to comeback from 6-10 down in the Ryder Cup and no US team had ever lost more than a two-point advantage on the final day since the competition began in 1927.

Olazabal loaded his top guns at the start of the singles slate and there was some early momentum as Luke Donald quickly went 2 up on Bubba Watson in the lead match and Europe were ahead in three of the first five matchups with one all-square.

But gradually the US team settled in with some strong middle-order players and it became increasingly clear how huge the task on hand was for the Europeans.

First point home was a blue one as Donald led from start to finish to see off crowd-pleaser Bubba Watson 2 and 1.

The Englishman was four up with five to play, but missed a four-footer to win on the 14th. Watson took the 15th and then chipped in to nick the 16th before Donald clinched it with a superb bunker shot at 17.

And when world No.1 Rory McIlroy completed a 2 and 1 win over the previously unbeaten Keegan Bradley, and Ian Poulter finished a perfect 4-0 by defeating Webb Simpson 2 up, the overall match was tied at 10-10.

Dustin Johnson beat Nicolas Colsaerts 3 and 2 to put the Americans back ahead only for Justin Rose to win the last two holes with monster putts to defeat Phil Mickelson 1 up.

Zach Johnson edged Graeme McDowell 2 and 1, but Sergio Garcia won the last two holes to stun Jim Furyk and Lee Westwood completed a 3 and 2 win over Matt Kuchar to make it Europe 13 US 12.

Jason Dufner defeated Peter Hanson 2 up and it was level at 13-13.

It all came down to the last two matches and they were both all square. Woods moved one up on Molinari, but Kaymer took the 17th against Steve Stricker and he sunk the nerve-jangling six footer at the last to ensure Europe had the 14 points they needed.

By the time Woods flopped at the last, Europe had taken the singles by an unthinkable 8 1/2 to 3 1/2. 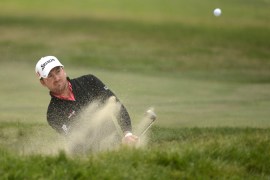 Rory McIlroy may be world number one but there are a number of unsung heroes in the team, writes Andrew Binner. 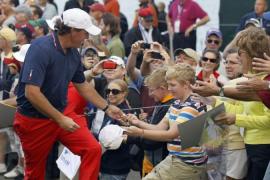 Al Jazeera has looked at the leading lights of Team Europe so now we focus on a few of Team America’s key men. 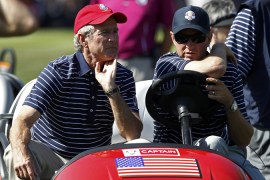 It’s all to play for on the final day of the Ryder Cup with the USA chasing four-and-a-half points for Medinah glory. 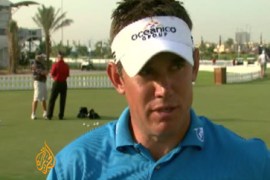 Jo Gasiorowska reports on the impact of the financial crisis on golf.