An ankle injury forced Maria Sharapova to retire from her quarter-final at the Pan Pacific Open in Tokyo on Thursday, allowing Wimbledon champion Petra Kvitova to progress to the last four.

Sharapova, trailing 3-4, twisted her left ankle in the eighth game against the Czech fifth seed, who beat her in the Wimbledon final in July.

“I landed awkwardly on my left ankle. I felt a sharp pain and the next thing I knew I was on the floor,” the Russian said.

“It swelled up immediately and I knew there was no way I could continue.”

Kvitova faces Vera Zvonareva in the semi-finals after the Russian beat compatriot Maria Kirilenko 6-3 6-3 in their quarter-final.

Defending champion Guillermo Garcia-Lopez crashed out of the ATP Thailand Open on Thursday as second seed Gael Monfils survived a scare to win in three sets.

Young will play in only his third career quarter-final at the ATP level when he meets Japan’s Go Soeda, who put out German Tobias Kamke 6-2, 7-6 (9/7).

“I was expecting a tough match and that’s what I got,” said Monfils, seeded second behind Britain’s Andy Murray who also made the quarter-finals with a 6-4 6-2 win over Michael Berrer of Germany.

Murray, who had a bye in the first round, will next face either Grigor Dimitrov of Bulgaria or Simone Bolelli of Italy.

“I started well and was serving well throughout the match,” Murray said.

Looking ahead to the Chinese Open, world number one Novak Djokovic has pulled out of the tournament after failing to fully recover from a rib and lower back injury, organisers said on Thursday.

Djokovic joins Roger Federer on the side-lines who is resting and recuperating after a gruelling summer.

The 24-year-old Serb, winner of three grand slam tournaments this year, retired from a Davis Cup match against Argentina’s Juan Martin del Potro this month because of the injury.

“Before he set out to Beijing, Djokovic had another physical check. Unfortunately, the result showed that he didn’t recover as expected,” organisers said on the website. 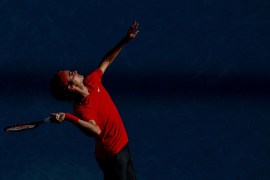 ‘Roger Federer is as good as ever’

Federer has not won a grand slam this year but former world number one Mats Wilander is full of praise for the player. 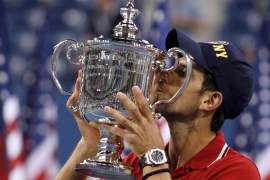 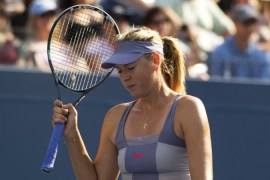 Sharapova stunned at US Open

Russian ousted by Italian Flavia Pennetta as Murray and Nadal advance to the third round. 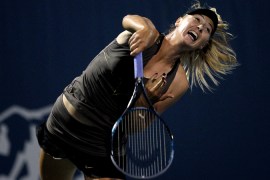 Sharapova has kept her position as the highest paid female sports star despite failing to add to her grand slam titles.