Germany became the first team to book their Euro 2012 place through the qualification groups as they hammered neighbours Austria 6-2 in Gelsenkirchen on Friday.

This was the Germans’ eighth straight qualification victory, giving Joachim Loew’s side an unassailable 24 points at the top of Group A to leave second-placed Turkey 11 points adrift.

Plucky Austria, however, exposed some weaknesses in the Germany defence and both Austrian goals were scored by players who ply their trade in the German league.

Despite the hosts making an explosive start to the game, the result suggests Loew still has some fine-tuning to do if Germany are to challenge at the finals in Poland and the Ukraine next June.

“We have qualified for the finals at the earliest available opportunity,” said Loew, with his side still to play Belgium and Turkey next month in remaining qualifiers.

“We got caught out twice defensively, but I think we restricted the Austrians to just two chances and I prefer that we created so many chances.

“It is our philosophy to constantly attack and we are working all the time to have a team in which we can interchange players.

“This is what you have to have if you want to be amongst the best in the world.”

Austria coach Didi Constantini, whose side cannot now qualify and whose contract expires in December, said the score reflected the gulf in class.

“I think everyone saw there was a huge difference between Germany and Austria,” he said.

“We were chasing the game in the first half.

“We had a few chances to make it 4-3, but Germany were simply too strong.

“I have a contract until December 21 and I intend on seeing that through.”

The hosts cruised into a 3-0 lead after 28 minutes thanks to goals by Miroslav Klose, Mesut Ozil, who added a second after the break, and Lukas Podolski.

Austria got back into the game as first Werder Bremen’s Marko Arnautovic, then Stuttgart’s Martin Harnik scored to keep the guests in the chase.

But German replacements Andre Schuerrle and teenage star Mario Goetze scored in the final ten minutes to add lustre to the win.

This was the first time Germany had conceded two goals in their qualification games since their Euro 2012 campaign began almost exactly a year ago.

The hosts took the lead after just eight minutes at Gelsinkirchen’s Veltins Arena when Klose latched onto an Ozil volley and, with the slightest of touches, deflected the shot into the net past Austrian goalkeeper Christian Gratzei.

It was the 33-year-old’s 62nd goal on his 111th appearance for Germany and inches him ever closer to 1970s’ legend Gerd Mueller’s record of 68 goals in 62 games as Germany’s top goal-scorer of all-time.

Playmaker Ozil then turned goal-scorer when he chipped Gratzei on 23 minutes after taking a pass from Klose.
Soon after, defender Holger Badstuber freed up Podolski on the left and the 26-year-old Cologne star fired home for his 43rd goal on his 91st appearance for his country.

Austria came back into the game as Arnautovic fired home a header for the visitors on 42 minutes after he slipped his marker.

Germany lost defender Benedikt Hoewedes at the break with a thigh strain, but Ozil ghosted past two defenders on 47 minutes to score Germany’s fourth, only for Austria to reply four minutes later with a goal from VfB Stuttgart striker Harnik.

Having come off the bench for Podolski, Bayer Leverkusen’s Schuerrle scored in the 84th minute to claim his second goal in two games having also netted when he came off the bench in last month’s 3-2 win over Brazil.

Goetze, who helped orchestrate the win over the South Americans, then came off the bench to hit the sixth goal on 88 minutes. He is now expected to start Tuesday’s friendly against Poland in Gdansk. 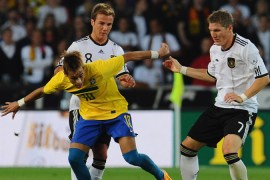 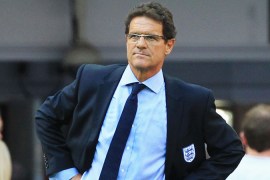 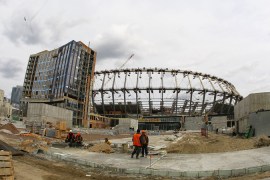 Year-long countdown to European Championships begins with Ukraine insisting it is ready to co-host with Poland.