MotoGP championship leader Casey Stoner won his eighth race of the season at the Aragon Grand Prix on Sunday.

The Australian rider dominated the race from pole for the second straight year, completing the 23 laps at the 5-kilometer MotorLand Aragon Circuit in 42 minutes, 17.427 seconds.

“This weekend we had hoped for a first-place finish again,” said Stoner, who now has 31 MotoGP career wins.

“It couldn’t have been better for us.”

Ben Spies of the United States briefly grabbed the lead after starting third in the grid, but the two Honda riders quickly regained the top two spots.

With just four races to go, Stoner holds a 44-point lead over Lorenzo.

“We have gone from the utmost glory at San Marino to being in the dumps very far from Casey and Dani,” said Lorenzo, who had cut the distance behind Stoner with his win at the San Marino GP.

“But we got the best possible result with a podium.”

Seven-time MotoGP champion Valentino Rossi finished 10th after starting the race from the pit lane with a 10-second penalty for using his seventh engine of the season, one more than championship rules allow.

Italian rider Andrea Dovizioso crashed on the race’s first curve and did not return.

In the 125cc class, championship leader Nicolas Terol of Spain won his eighth race of the season. Johann Zarco of France finished second after Hector Faubel crashed when trying to pass him on the last lap.

The next race, the Japanese Grand Prix, will be held from September 30 to October 2. 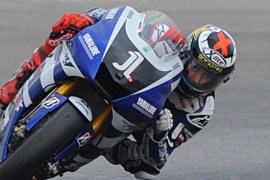 World champion claims much-needed victory and closes the gap behind Casey Stoner in the MotoGP standings. 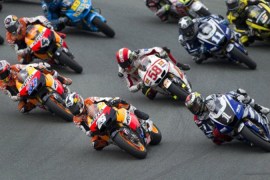 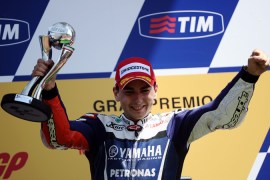 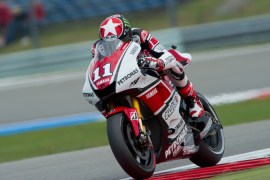