Manchester City’s clash with Napoli on Wednesday not only marks the club’s first foray into the Champions League but just how far Manchester’s other team has come.

Roberto Mancini’s men have never competed together on such a big stage but with a squad that includes Carlos Tevez, Sergio Aguero and David Silva they enter the competition as one of the favourites.

The pressure is well and truly on, and it is likely billionaire owner Sheikh Mansour will not take inexperience as an excuse if Mancini’s men should tumble at the first hurdle.

Keeper Joe Hart does not believe that that will happen and thinks the Champions League experience running through the side ensures they won’t be daunted by their first adventure into Europe’s premier competition.

However, the challenge will not be easy for City as the mega-rich club also prepare to face Germany’s four-times European champions Bayern Munich and Spanish side Villarrael in what has been dubbed the group of death.

England goalkeeper Hart says Roberto Mancini’s expensively-assembled squad can cope with the demands at the step up in quality.

The likes of Yaya Toure, who won the competition with Barcelona, and Sergio Aguero and Samir Nasri are seasoned campaigners at this level and that will stand them in good stead when it matters most, according to Hart.

“It’s vital we have got players who have been there and even done it in the Champions League,” said 24-year-old Hart.

“There’s no doubt it’s going to be a step up in class, but the fact many of the squad have proven themselves at this standard helps.

“It’s something we have been striving for. There is a belief we can do well and we won’t be fearing anyone.”

Hart believes home advantage first up, against another tournament debutant in Napoli, could ease Manchester City gently into unknown territory.

“We know Napoli are a strong side, just like the rest of the teams in the group, but being home first up is an advantage,” said Hart.

“Some of my closest friends in the England team have played in the Champions League, so it’s big thing to be finally there.

“I know when the Champions League music starts, I’ll be humming along.”

While many of his players are novices in the elite competition, Manchester City manager Mancini knows all about club football’s grandest stage.

But his track record is nothing to write home about. Mancini reached the European Cup final as a Sampdoria player 20 years ago, when the Italians were beaten by Barcelona at Wembley.

As a manager, he has been unable to replicate domestic success with Lazio and Inter Milan. He would love to write a wrong this time around, but says his only target is to progress from their difficult group after dampening down expectations.

“The Champions League is a difficult competition,” said the Italian.

“I don’t have any regrets about what happened in the Champions League with Inter because I know that it is so difficult to win.

“You don’t just need a good team, you also need luck. People are looking at Manchester City now and are saying we have spent a lot of money.

“But in the summer there was a minimum of six or seven teams in Europe who spent more money than us.”

Mancini has put his players on alert after claiming Napoli boast firepower to rival his in-form side, who have already scored 15 goals in four successive Premier League wins.

“Napoli are a good team. They play good football, they have a good group of players, and they have fantastic supporters. This game will be very hard for us.

“I like Edinson Cavani. He is a fantastic striker who works for the team.

“But they also have Ezequiel Lavezzi, Goran Pandev and Marek Hamsik – and those players are very dangerous.”

However, with investment totalling around the $1 billion mark, it is likely that Manchester City now have the squad that could handle any team in the competition. Aguero on hand with hat-trick for City

Man City’s goal bonanza continues against Wigan, Arsenal finally get a win and Tottenham put first points on the board. 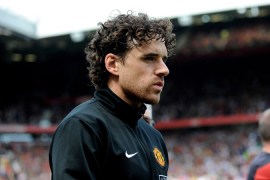 Despite struggling with injury Owen Hargreaves is lining up move to City while Scott Parker looks set to join Spurs. Nasri on his way to City

Arsenal announce that they have agreed to sell Nasri to northern rivals as another big name leaves the Gunners.