When the list of the world’s greatest active strikers was released by a German website last month, the likes of Thierry Henry, Raul Gonzalez and Ruud Van Nistelrooy weren’t at the head of the roster.

Instead it was veteran Singapore forward Aleksandar Duric, who’s now hoping to guide his adopted nation through the third round of Asian World Cup qualifying.

With 328 goals in 444 top division club appearances, Duric is top dog, according to the International Federation of Football History and Statistics (IFFHS).

Not even the recently retired Brazilian Ronaldo, with 246 in 346 games, comes close to that.

Turning 41 on August 12, Duric is as an unlikely superstar as you’ll ever meet.

Playing before sparse crowds in the S-League, the former refugee from Bosnia earns a modest salary as he captains Tampines Rovers in the city’s eastern heartland.

But last month the lanky 1.92m left-footer enjoyed possibly his finest hour as he inspired Singapore to victory over Southeast Asian champions, Malaysia, in a two-legged World Cup play-off.

He scored twice and set up another as the Lions won 5-3 at home and then provided the crucial assist in a 1-1 draw before 85,000 fans in Kuala Lumpur.

“It was a huge highlight for me to play in front of that many people because we weren’t intimidated by the crowd,” he said.

“Once we entered the pitch it was our 11 against their 11. It was simply a fantastic week for Singapore football.”

Now Duric and Singapore find themselves in Group A along with China, Iraq and Jordan for the next round of World Cup qualifiers.

Their first game is away to China on September 2.

Goal poacher, goal creator and classic target-man, Duric is expected to share the pitch with players who are more than half his age, including 20-year-old Singapore midfielder Hariss Harun.

His teammates routinely call him ‘uncle’ and rib him about cashing-in his retirement fund.

Debate has raged across the island state about the wisdom of having a naturalised 40-something striker keeping out young locals, even with his string of domestic golden boot and player-of-the-year awards.

After Singapore’s failed Suzuki Cup campaign at the end of last year, Duric was dropped by coach Raddy Avramovic but recalled soon after.

“If someone told me 10 years ago that I’d be playing for the national team at the age of 41, I would have laughed,” he said.

“But it just goes to show that nothing is impossible with hard work and determination. It doesn’t really bother me that people go on about my age because each match I play proves my worth.”

His road to international acclaim and Singapore’s soothing condominium lifestyle is a long one.

It began growing up in an ethnic Serbian family in the town of Doboj in war-torn Bosnia, and includes painful memories, like losing his mother to an artillery attack in 1993, plus living as a refugee in Hungary.

Duric served as an officer in the Bosnian army and credits 60km walks carrying a 30kg pack and gun in the Balkans winter for the toughness he brings in warmer climes almost two decades later.

Before professional football, he was better known for his feats in another sport – kayaking – after representing Bosnia at the 1992 Olympic Games, using equipment borrowed from the Spanish and Italian teams.

Duric hitchhiked to Barcelona for the Games, travelling without a passport from Hungary.

A year earlier, his father had ordered him to flee Bosnia because of the deteriorating situation, beginning a sporting Odyssey that would eventually take him to Asia.

His first encounter with Singapore came during a 24-hour stopover in 1995 on the way to Australia where he would play for six clubs in three different cities.

It was in Melbourne in 1998 where he was introduced to Natasha, the Australian who would become his wife and mother of his two children.

With the faint hope of playing for the Socceroos, Duric took out Australian citizenship.

But in 1999 when his Adelaide club went bankrupt, he accepted an offer to play in the S-League.

His new side needed a centre forward so Duric had to change from his favourite left midfield role.

Little did anyone know that this 29-year-old journeyman was starting a process that would see him become the world’s top-ranked striker a dozen years later.

He made his international debut at the age of 37 in 2007, scoring both goals in the 2-0 victory over Tajikistan.

“I feel that my time playing professional football is definitely coming to an end,” he said.

“Maybe one more season, but not more than that.”

Perhaps Duric will match Teddy Sheringham, who retired from the English Premier League as a 42-year-old.

Already Duric is planning for a post-football sports career as a triathlete.

“Not much will change for me in terms of diet and exercise because I will still keep fit and eat well. But I am not looking forward to retiring because I feel as though a big part of my life will end,” he said.

His renowned fitness will be tested when Singapore travel to the lung-busting altitude of Kunming (elevation 1,892m) in Yunnan Province for their next qualifier.

The Singaporeans have never beaten China in a full international but that could change if the greying shushu up front has anything to do with it. 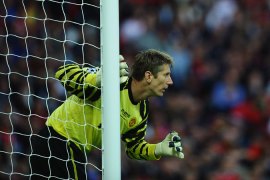 ‘I think more about the finals I lost’

Edwin van der Sar says that he feels the trophies that slipped through his gloves more keenly than those he won. 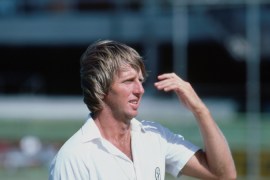 Former Australian Test bowler Jeff Thomson ponders what could have been a lucrative career in football. 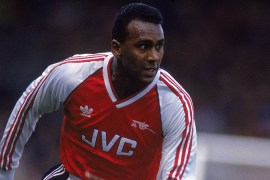