England enjoyed another dominant day against India by bowling the tourists out for 224 on the first day of the third Test at Edgbaston before closing on 84 without loss.

Andrew Strauss, who won the toss for the first time in the four-match series, was 52 not out and Alastair Cook was on 27 after India’s pace bowlers were unable to exact any kind of control.

Strauss raised England’s 50 with a square cut for four off Shanthakumaran Sreesanth for his seventh boundary that took him to 31. He later registered his own half-century 13 balls from the close, his first test fifty of the English summer.

India captain Mahendra Singh Dhoni raised India’s spirits with an enterprising 77 from 96 balls, leading a fightback from 111 for seven after lunch.

Dhoni and Praveen Kumar (26) added a run-a-ball 84 for the eighth wicket to frustrate England.

Tim Bresnan (four for 62) and Stuart Broad (four for 53) shared the wickets.

India, 2-0 down in the series, started badly. They lost veteran opener Virender Sehwag, playing his first Test in eight months after recovering from shoulder surgery, to his first ball.

Sehwag gloved a shortish Broad delivery that he attempted to leave only to see it seam back into him and flick his glove.

Umpire Steve Davis said not out initially but England’s decision review was vindicated courtesy of the hot-spot technology.

Gautam Gambhir (38), who started positively with seven boundaries, tried to drive Bresnan through the covers only to lose his leg stump off the inside edge.

Although Tendulkar lived dangerously for the one over he faced from Anderson, he departed to Broad in the following over, pushing at a ball just outside off stump to find Anderson at third slip.

Bresnan bowled Rahul Dravid (22) on the stroke of lunch with a ball that just left him late to reduce India to 75 for four.

Left-hander Suresh Raina (4) was bowled after the break by an Anderson delivery that swung back in, between bat and pad.

VVS Laxman (30) looked comfortable in his 41-ball stay at the crease until he flicked a pull shot off Bresnan to fine-leg and Amit Mishra (4) edged Broad to the wicketkeeper, before Dhoni and Kumar came together.

Dhoni was the ninth man out, caught at first slip by Strauss off Broad.

He hit 10 fours and three sixes, including one slogged over mid-wicket off Bresnan.

England made one change from the team who won by 319 runs at Trent Bridge, replacing the injured Jonathan Trott with Ravi Bopara.

Victory would put England on top of the Test world rankings ahead of second-placed South Africa and current world leaders India. 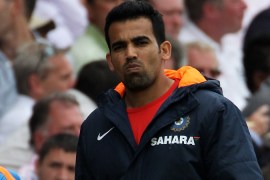 Zaheer out of England tour 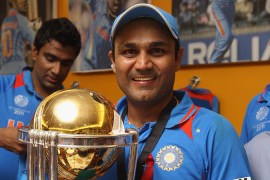 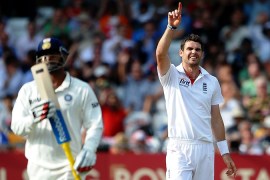 England becoming the team to beat

Shane Warne draws comparisons with Australian sides of old as England indicate they could become something ‘special’.