Asafa Powell won the 100-meter race in 9.86 seconds at the Hungarian Grand Prix on Saturday, the fastest run in the country.

The Jamaican was the only competitor to run under 10 seconds in windy conditions and temperatures of 20 degrees (68 Fahrenheit) at Ferenc Puskas Stadium, finishing ahead of Ngonidzashe Makusha of Zimbabwe and Andrew Hinds of Barbados.

“I could have gone a lot faster today but I was working on some stuff,” said Powell, whose personal best is 9.72.

“It was cold and I was a bit cautious. It was still a good time.”

Powell will compete at the Aviva Grand Prix Diamond League meet in London next weekend. It’s his last race before the world championships, which start August 27 in Daegu, South Korea.

Veronica Campbell-Brown of Jamaica won the women’s 200 in 22.26 seconds, with Sanya Richards-Ross of the United States second in 22.63. Blessing Okagbare of Nigeria was third.

Joel Craddock led an American sweep of the top three spots in the 110 hurdles, winning in 13.48. Kevin Craddock was second, followed by Jeff Porter.

Kevin Borlee of Belgium took the 400 in 45.91, followed by Hungary’s Marcell Deak Nagy and Erison Hurtault of France.

Double-amputee Oscar Pistorius of South Africa, who runs on carbon-fiber blades and qualified for the able-bodied worlds for the first time earlier this month, was last in the 400 after finishing in 47.47.

“This is a really beautiful city and the crowd was really supportive. I’m just sorry I couldn’t give them a quicker time,” Pistorius said.

“I hope to return one day and give them a better race.”

Zoltan Kovago of Hungary won the discus with a throw of 69.50 meters on his fifth attempt, the best in the world this year. He beat Virgilijus Alekna of Lithuania by nearly 3.5 meters.

Saturday’s tournament was the inaugural edition of the Istvan Gyulai Memorial, commemorating the late Secretary General of the IAAF who died in 2006. He was a sprinter in his youth, winning 28 national championships in Hungary. 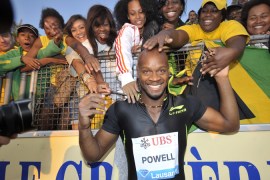 Asafa Powell gives Usain Bolt something to think about with a stunning time at the Diamond League meeting in Lausanne. 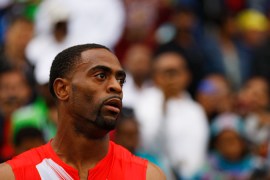 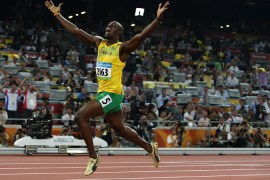 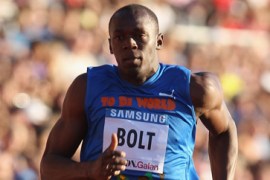