It was a day of fight-backs for the England cricket team on Friday as they struggled to make runs during the first day of their second Test against India.

In testing conditions, Stuart Broad knocked his team’s innings back into shape top-scoring with 64.

Kevin Pietersen and Andrew Strauss had earlier fought back at the stumps after England lost two early wickets when Alastair Cook and Jonathan Trott failed to get into double digits.

Broad, batting at number nine on his Nottinghamshire home ground, was in fine fettle pushing England along to a total of 221.

India at stumps were 24 for one in reply, as they look to level this four-match series.

Rahul Dravid was seven not out and Venkatsai Laxman 13 not out after India lost opener Abhinav Mukund to the first ball of their innings when he pushed at James Anderson and was caught in the gully by Kevin Pietersen.

“India certainly won three quarters of the day but we managed to grab a bit of momentum back towards the end and probably ended up a bit disappointed not to pick up more wickets,” Broad told Sky Sports.

“Unfortunately we lost six pretty quick wickets but we are still in with a shout of winning the Test match. It is swinging consistently as it always does at Trent Bridge.”

England captain Andrew Strauss and Ian Bell were the only other batsmen apart from Broad to make more than 30.

But Broad, who together with Nottinghamshire colleague Graeme Swann added 73 for the ninth wicket, said life had been tough for England’s top-order.

“You can’t look and blame anyone for throwing their wickets away, I thought India bowled pretty well. The ball has done a little bit today and it was a good toss to win.”

Although India were without left-arm quick Zaheer due to the hamstring injury that had forced him off the field early on at Lord’s, India captain Mahendra Singh Dhoni opted to field after winning the toss.

Sharma made the breakthrough when he had Alastair Cook lbw for two before Sreesanth had Jonathan Trott, on four, caught by second slip Laxman.

Five balls after lunch, Pietersen, on 29, was squared up by Sreesanth and nicked to third slip Suresh Raina.

Swing bowler Kumar dismissed Strauss when a full-blooded drive was well-held by Raina.

That same over saw 85 for four become 85 for five when Kumar’s outswinger to Eoin Morgan had the left-hander lbw for nought.

Matt Prior who had frustrated India with an unbeaten century at Lord’s could manage just one on Friday before edging Sreesanth to first slip Dravid.

Bell, dropped on 22, got himself out when he flat-footedly cut at Sharma and was caught behind by wicketkeeper Dhoni.

Broad and Swann hit out before their stand ended when Swann gloved a rising delivery from Kumar to Mukund on 28.

Off-spinner Swann was sent for an X-ray on his left hand but scans showed “no siginificant damage” and he is expected to be fit to bowl.

Left-handed batsman Broad, on-drove Kumar for his seventh four to complete a 56-ball fifty before he was last man out when he holed out to off-spinner Harbhajan.

England will hope conditions remain testing for India’s batsman tomorrow as they seek to whittle their opponents down in similar fashion. 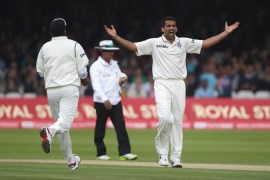 Zaheer Khan ruled out of Test

Both India and England have hamstring injuries to contend with although momentum is with England going into second Test. 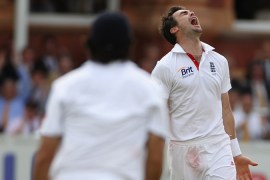 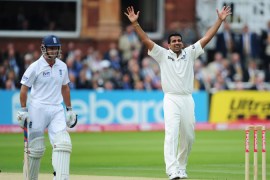 India suffer big blow during first day of first Test against England when star bowler pulls up with hamstring injury.