America’s Ryan Lochte broke a 19-month record drought by winning a thrilling 200m individual medley ahead of Michael Phelps at the world championships in Shanghai on Thursday.

Lochte’s second gold and Phelps’ gold in the 200m butterfly means the United States are on song to dominate the men’s pool competition at next year’s London Olympic Games.

Lochte out-duelled Olympic champion Phelps to win the medley in 1min 54.00sec, shaving one tenth of a second off his 2009 world record, with his team-mate taking silver and Hungary’s Laszlo Cseh third.

With the win, the 26-year-old Lochte retained his world title and earned further bragging rights over his long-time rival, who is yet to show the form that has earned him 14 Olympic gold medals.

Lochte, 26, also ended a long barren streak which had seen no long-course records broken since super-fast polyurethane swimsuits were banned at the start of last year.

“I knew it was going to be a battle between Michael and I. I got the better end this time,” Lochte said.

“Any time you break a world record, you’ve got to be excited. I trained really hard and it paid off.”

Phelps enjoyed a slim early lead over the butterfly leg but Lochte, swimming in the adjacent lane, edged it over the backstroke, breaststroke and freestyle sections to win by 0.16sec.

Lochte had already beaten Phelps to win the 200m freestyle title, turning the screws on his out-of-sorts team-mate after he was part of the United States’ relay team that lost its six-year grip on the 4x100m relay on day one.

But Phelps stormed back with a dominant win in the 200m butterfly, which is not one of Lochte’s events, sealing the 23rd world title of his record-breaking career as the clock ticks down to his retirement next year.

“I felt good and I thought I was a little long at the finish, and that cost me the race,” Phelps said after the medley.

“I’m a little disappointed but at the same time it’s faster than I went in 2008 at the Olympics, so that’s a good thing. That one frustrated me more than anything. I thought I was going to get that one but it is what it is.”

In the 100m freestyle final, Magnussen was well out of the medals at the turn but he roared past the field over the second 50m to take it in 47.63sec ahead of Canada’s Brent Hayden and William Meynard of France.

Brazilian defending champion and world record-holder Cesar Cielo, who has been in the firing line after testing positive for a banned diuretic, was fourth.

In the women’s 200m butterfly, Jiao led from start to finish to win ahead of Britain’s Ellen Gandy and world record-holder Liu Zige of China.

Fellow Briton Jemma Lowe, who qualified fastest for the final, finished in seventh. 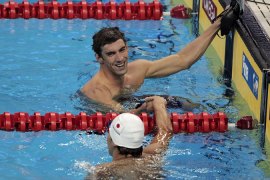 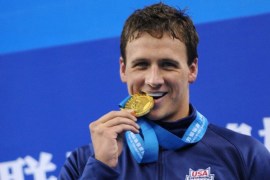 In the battle of the Americans, Ryan Lochte claims gold in the 200m freestyle event over Olympic star Michael Phelps.