American Michael Phelps won his first gold medal of the world swimming championships in Shanghai, one year to the day before he begins his final Olympics campaign.

Phelps, the most successful Olympian of all time who won an unprecedented eight gold in Beijing in 2008, has said he will retire after the London Olympics that open on July 27 next year.

A bronze in the men’s 4×100 freestyle relay and silver behind compatriot Ryan Lochte in the 200 freestyle as well as recent defeats in the 200 butterfly – his signature event – in the lead up to Shanghai had left the 26-year-old facing 12 months of gruelling preparation under coach Bob Bowman.

His victory in the 200 butterfly on Wednesday, however, at least indicated he has a base to build on his way back to his best form.

“I’m happy but this is just a small step for my next year and…I’m super happy with swimming faster than I did than last year…but I still want more and I want to be faster,” Phelps said.

“Being able to swing all these semis and finals, I haven’t been able to do this (physically) for a while.

To top off victory, Phelps also qualified for Thursday’s 200 individual medley final with Lochte, the 2009 world champion, after the pair swam the two fastest times.

Chinese teenager Sun Yang whipped the home crowd into a patriotic fervour as he controlled the 800 freestyle final from start to finish to win China’s third gold medal in the pool, and 13th overall in Shanghai.

It was also just the second gold won by a Chinese man in swimming at the championships since their inception in 1973, though their women have claimed 29 world titles.

The 19-year-old threw his victory bouquet into the crowd and then handed his commemorative soft toy mascot to a young girl.

Italy’s Federica Pellegrini won the women’s 200 freestyle to secure the 22-year-old an unprecedented double-double, having won both the 200 and 400 freestyle at the same championships twice.

The 200-400 double had only been achieved on four previous occasions, though Pellegrini is the first to do it twice.

Australia’s James Magnussen produced an incredible burst of speed over the second lap of the 100m freestyle to be the only man under 48 seconds in the semi-finals and qualify fastest for Thursday’s blue riband final.

“I think this is a very important meet, because I will be dealing with the same people in the Olympics,” said the 20-year-old Magnussen, who is competing at his first world championships.

“I am a confident swimmer. When I am confident, crazy things happen.” 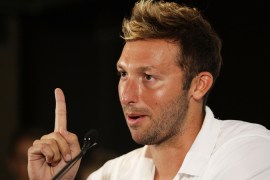 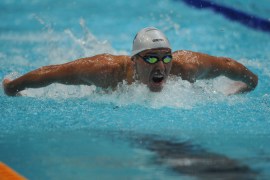