Turkey’s football federation decided on Monday to delay the start of the new season until September 9 from August 5 amid an investigation into match-fixing allegations involving some of the country’s major clubs.

A Turkish court has already jailed pending trial 31 people, including the chairman of champions Fenerbahce and the coach and deputy chairman of Besiktas on charges of match fixing which have plunged preparations for the new season into chaos.

The postponement came just a few hours after Turkish federation president Mehmet Aydinlar met the prosecutor in charge of the investigation about the alleged fixing of 19 games.

Aydinlar said the Super League would now start on September 9, with the Bank Asya league beginning the next day.

The season had been due to start in early August.

Fenerbahce won 16 of 17 league matches in the latter part of last season to come from a distant third place and claim a record 18th title, beating Trabzonspor on goal difference.

Angry Fenerbahce fans took to the streets in violent protests against the detention of club officials with the team at risk of losing its title.

The decision to postpone the start of the league came despite warnings by Fenerbahce that such a decision would further harm the club, which has already lost millions of dollars after its shares plunged in the stock market.

Turkish authorities, meanwhile, are also looking into the suspicious movement of Fenerbahce shares and those of other clubs on the Istanbul stock market last season.

Last Thursday, hundreds of angry Fenerbahce fans invaded the field at Sukru Saracoglu stadium in the second half of a friendly against Ukrainian champions Shakhtar Donetsk, forcing the abandonment of the game.

The federation described the incidents as “unacceptable”, leading to speculation in the media on Monday that it could decide against allowing a match between Turkey and Germany on October 7 to be played at the same stadium.

It said there has been “no decision on where the match would be played.”

The federation so far has refrained from taking any disciplinary measures against Fenerbahce or Trabzonspor, allowing them to compete in the European Champions League.

Turkey is the latest country to be affected by a slew of match-fixing and betting scandals around the globe, from South Korea to Zimbabwe.

The Turkish government has promised to be tough on match-fixing, introducing legislation three months ago to confront hooliganism and cheating in football, which includes a maximum 12-year prison sentence for fixing games. 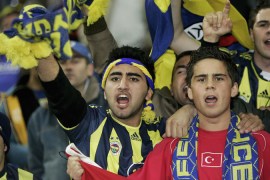 Things turn ugly at friendly when enraged Fenerbahce fans protest against match-fixing charges against their side. 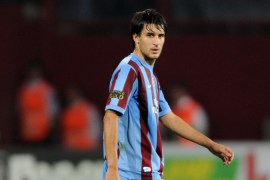 Turkish club Trabzonspor could yet be handed the title but still have to face Benfica in Champions League qualifying. 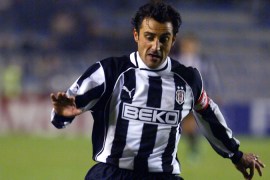