Recovery permitting, Alberto Contador will revert to his usual attacking style in the Alps with his Tour de France title looking in jeopardy after two weeks of racing.

The 28-year-old Spaniard lost crucial time after being held up behind a pile-up on the first stage and also hit the deck in the first week, sustaining a knee problem that forced him to sit and wait in the Pyrenees.

The three-time champion – who won May’s Giro d’Italia in awesome fashion – lies seventh in the overall standings, four minutes behind leaders Thomas Voeckler of France and about two minutes adrift of his main rivals.

“Because of the crash, I had to change my pedalling. My (right) knee was hurting so I had to compensate with the other knee and it changed my way of pedalling,” Contador told a news conference on Monday as the peloton enjoyed their second rest day in the three-week race.

“But I feel better, I’m confident for the Alps.”

Contador will have two gruelling stages in the Alps on Thursday and Friday to make up for lost time, as well as a 42.5-km individual time trial on Saturday.

“The Galibier stage (from Pinerolo to Serre Chevalier on Thursday) is the hardest with the last 10 kilometres of the ascent to the Col d’Agnel,” the Saxo Bank rider explained.

“I’m not as good or as fresh as at the Giro but I think I will be better in the Alps than in the Pyrenees. If I have good legs, it is certain that I will attack because it is my style.”

In the first two mountain stages in the Pyrenees, Contador benefited from a waiting game between the overall contenders as Cadel Evans refused to attack while the Schleck brothers’ attempts were not sharp enough to unsettle the other favourites.

But Contador cannot wait for the final time trial to make the difference, especially against Australian Evans, who shines in the solo effort against the clock.

“I can’t win the Tour with the time trial if the standings after the Alpe d’Huez are the same as today,” he said.

“In the Alps, the ascents are longer and go higher above ground level. Some who were good in the Pyrenees will be disappointed in the Alps.”

With only one more week of racing left, the Schleck brothers have yet to figure out whether it will be Andy or Frank that will lead their Tour de France challenge.

Frank is second in the overall standings, 1:49 behind France’s Thomas Voeckler while Andy, runner-up to Alberto Contador in the last two editions of the Tour, is fourth and 26 seconds further back.

Both still have a chance to claim their first grand Tour, but one of them will have to make a sacrifice to help his brother and Leopard Trek team mate win.

“We know that we cannot both win the Tour, at least not in the same year,” Andy told a news conference on Monday.

“I only see one of us being on the podium, but in the yellow jersey.”

The brothers will have to make a choice quickly as there are only two potentially decisive mountain stages on Thursday and Friday left.

Despite having four Tour stages under his belt already, British sprinter Mark Cavendish remains cautious heading into the final week of the Tour de France after twice narrowly missing out on the green jersey.

Although Cavendish has a sizable lead over Spain’s Jose Joaquin Rojas and Belgium’s Philippe Gilbert with one sprint stage remaining – Sunday on the Champs-Elysees in Paris – he says “nothing is guaranteed.”

The bitter memory of losing to Thor Hushovd in 2009 means Cavendish will be looking over his shoulder in the Alps this week, where he expects rivals to try to gain bonus points to close the gap.

Cavendish says “two years ago I thought I had the green jersey,” but lost it when Hushovd “went on the attack in the mountains.” 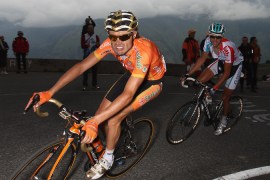 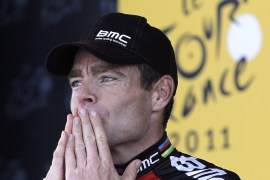 The fourth stage of the Tour de France was so close Alberto Contador mistakenly celebrates victory as he crosses line. 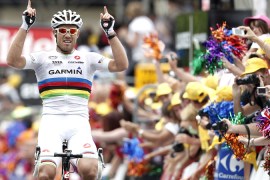 The hopes of a maiden stage win for Jeremy Roy were dashed after a late spurt from Hushovd, while Voeckler keeps jersey. 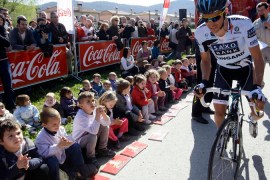