Paraguay, who did not have a single shot on target in 120 minutes of a goalless Copa America quarter-final, sent holders Brazil crashing out 2-0 on penalties on Sunday.

Brazil joined hosts Argentina, their rivals in the previous two finals, in going out of the tournament at the same stage after Argentina lost on penalties to Uruguay on Saturday.

Brazil dominated the 120 minutes of play which ended 0-0, creating a string of chances which Paraguay repelled with a mix of stubborn defending, some luck and a man-of-the-match performance from goalkeeper and captain Justo Villar.

The teams were down to 10 men each from the 13th minute of extra time after a scramble for the ball by several players on one side of the pitch developed into a free-for-all with Paraguay defender Antolin Alcaraz and Brazil midfielder Lucas Leiva sent off.

The Brazilians, brilliant at times in open play, were dismal in the shootout with Elano, Andres Santos and Fred all firing their penalties wide while Villar saved from Thiago Silva.

“It was a match dominated almost entirely by Brazil. We had to take refuge a lot of the time at the back and, well, the penalties are a lottery which we took well and they failed with theirs,” Villar said.

“You need more than will to win matches, you need goals and all Brazil lacked was goals,” Brazil coach Mano Menezes told a news conference.

“Our opponents have not won a match (at the tournament),” he added after Paraguay qualified with three draws including 2-2 against Brazil in their group.

Brazil had the best moves of the first half. In the seventh minute, Robinho ran from the right across to the left and fed Pato whose pass back into the middle was only half-cleared with Neymar volleying the ball just over the bar.

They should have scored close to the half hour when Paulo Henrique Ganso passed forward to Robinho who threaded a good ball out right to the unmarked Neymar whose low shot went just outside the far post.

Left back Andre Santos took a 33rd-minute free kick, putting it low into the edge of the six-yard box where centre back Lucio broke through but had his effort blocked by Villar.

Andre Santos shot over when set up by midfielder Ramires’s diagonal pass from deep on the right as the first half wound down.

Brazil got back to business right away in the second half as Maicon set up Neymar for a shot that was scrambled away to Maicon, whose shot was also blocked.

Ganso had a brilliant low shot saved by Villar at the base of the near post in the 67th and five minutes later the goalkeeper blocked a point-blank effort from Pato.

Pato looked set to score in the 82nd when put through by Robinho but Villar blocked his effort and the striker headed the rebound into the side-netting from a tight angle.

As Brazil continued to pound the Paraguay defence, substitute Fred’s header from a corner was cleared off the line by Barreto.

Two minutes from the end a shot by Barreto appeared to hit Thiago Silva’s arm as he blocked it and striker Nelson Haedo Valdez also came close with a shot from outside the box.

Venezuela beat Chile 2-1 to reach the semifinals of the Copa America for the first time in their history.

Centre-back Oswaldo Vizcarrondo had given the Venezuelans the lead with a header from a set piece in the 35th minute before Humberto Suazo equalised for Chile in the 70th minute.

Both teams ended the match with 10 men, Chile’s Gary Medel and Venezuela’s Tomas Rincon sent off in the closing minutes.

Venezuela will face Paraguay in Mendoza on Wednesday for a place in the final. Their best previous finish at a Copa America was fifth in 1967. 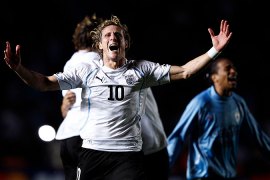 After a 5-4 penalty shootout victory, Uruguay set up semi-final clash with Peru, who beat Colombia 2-0. 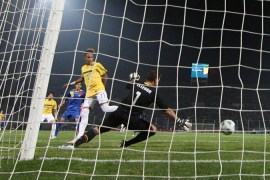 Brazil beat Ecuador 4-2 to set up meeting with Paraguay at Copa America while Venezuela also advance. 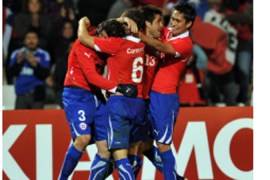 Chile leave it late to top their group and book a place among the last eight at Copa America. 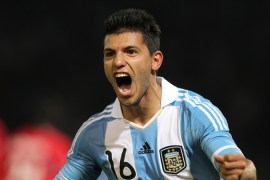 Argentina on song in 3-0 Copa win

Hosts and pre-tournament favourites beat Costa Rica to book their place in the quarter-finals of the Copa America.