Against all the odds, Japan announced themselves to the world as a new force in women’s football by defeating the USA in the World Cup final on Sunday.

The exciting final in front of a sell-out crowd in Frankfurt was a great showcase for the women’s game with the Americans and Japanese battling their way into a penalty shootout.

With the score tied at 2-2 after added time, Japan went on to win the shootout 3-1 when Saki Kumagai slotted the final shot high past goalkeeper Hope Solo.

While the Americans lashed out from the spot the Japanese showed a calm that has been one of their trademarks throughout the tournament.

Japan’s passing skills and teamwork has led to people comparing the team to Barcelona and they lived up to this praise in the final stages of the match.

Although it certainly was not easy.

Japan survived an early onslaught from the United States and then had to twice come from behind to ensure it was a penalty shootout that would decide the victors on the day.

Japan were outplayed in the first 20 minutes and it looked like the United States would soon be adding another World Cup trophy to their 1991 and 1999 wins.

However, it wasn’t until the 69th minute that Alex Morgan put the US ahead with a stunning solo effort, stylishly directing the ball into the net.

Against the run of play, Japan scored a goal out of nothing in the 81st minute when American defenders Rachel Buehler and Alex Krieger failed to clear a ball, allowing star Japan player Aya Miyama to sneak in and slot home from close range past Solo.

Japan came back into the game late in regulation time, but the Americans kept hustling and pressuring and it finally paid off when Alex Morgan sent a pinpoint cross to the towering Wambach in the 104th minute.

The forward didn’t even have to lift a foot to send her header past goalkeeper Ayumi Kaihori from six yards.

The goal gave Wambach four for the tournament, and it looked good enough for the title. She had scored in the last minute of extra time with a header against Brazil, setting up the shootout win in the quarter-finals, and a goal against France in the semi-finals.

But in this thrilling final it turned out there was much more to come.

With three minutes of extra time left, 32-year-old Japan captain Homare Sawa flicked a corner through a jumble of players and past Solo to equalise and set up the shootout.

After coming so far in a tournament they were never expected to feature heavily in, it seemed destined to be that Japan would walk away as champions.

As well as fighting to become the first Asian nation to win the women’s tournament the team were also fighting to bring some joy to their earthquake-striken nation.

“We ran and ran. We were exhausted but we kept running,” said Sawa, the top scorer in the tournament with five goals.

“Not one of the players gave up,” coach Norio Sasaki said.

It was a fairy tale victory for Japan who have been spurned on in the tournament by the devastation caused to their country by the March earthquake and tsunami.

Japan coach Norio Sasaki had shown the players photos of the damage to heighten their focus and determination before they met the hosts Germany in the quarter-finals.

It did the trick then, and it seemed to have focused Japan on producing performances that would lift their supporters back at home.

The Japanese team have been fighting for much more than a trophy, they have been playing for pride and hope.

And after defeating the well-fancied hosts Germany and the USA – a superpower in women’s football – they will deservedly return back to Japan as heroes. 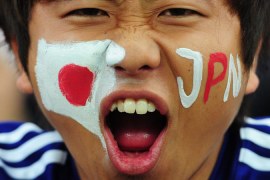 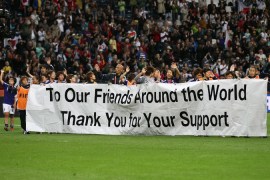 The final step for Japan’s women

Japan were never meant to reach the World Cup final but they’ve been spurned on by something much greater than football. 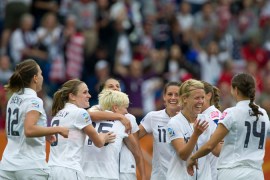 The United States join Sweden in the quarter-finals after defeating Colombia 3-0 in front of a sell-out crowd. 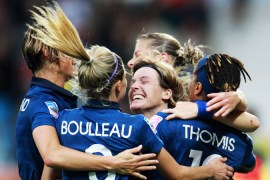 Victories for France and Germany send Canada and Nigeria packing in Group A of the women’s World Cup.