An emotional Pele watched his former side Santos win the Copa Libertadores for the first time since he was the star of the team as the Brazilians beat Penarol in Sao Paolo.

Santos were crowned champions of South America for the third time after goals from “new Pele” Neymar and fellow teenager Danilo gave them a 2-1 win over the Uruguayans in the second leg.

“I think I deserved this championship,” Santos coach Muricy Ramalho, who failed to win it with Sao Paulo, Sao Caetano and Fluminense, told reporters on the pitch.

“I’ve been trying for many years and I believe Santos deserved it too.”

Ugly scenes erupted at the final whistle, however, as players, both benches and fans who found their way onto the pitch staged a full-scale brawl, repeating the spectre of violence that marred earlier finals.

“That’s something (that comes) from those you don’t like losing,” Neymar told reporters.

Santos succeeded fellow Brazilians Internacional as South American champions and earned a place in the Club World Cup in December.

Pele, who inspired Santos to their first two titles in his 1960s heyday, went onto the pitch at the end to embrace Ramalho and Santos players.

“Neymar is very talented and he did not have a good first half because Penarol have a good defence,” Pele said.

The gifted 19-year-old, regarded by many as a capable heir to Pele for Santos and Brazil, broke the deadlock less than two minutes into the second half.

Indefatigable midfielder Arouca exchanged passes with playmaker Ganso and rode several tackles on a run across the edge of the box before feedong the ball to Neymar, who hit a low shot under goalkeeper Sebastian Sosa.

Danilo doubled the advantage in the 69th minute, racing into the box from the right onto a pass by Elano before steering a fine, low left-footed shot past Sosa just inside the far post.

Battling Penarol, who won the last of their five titles in 1987, got back into the contest 10 minutes later via an own goal by central defender Durval, whose attempt to block a cross lobbed up over goalkeeper Rafael into the net. 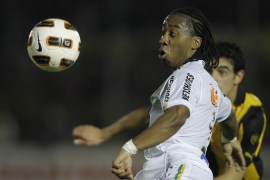 Penarol and Santos draw 0-0 in Montevideo in first leg of Copa Libertadores final. 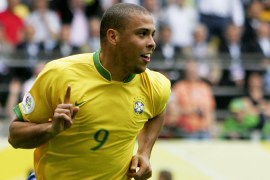 Striker quits football at the age of 34 to leave the legacy of a brilliant but sporadic career for club and country. 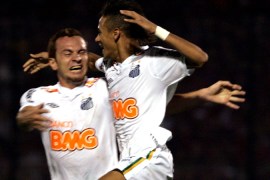 Brazilians hope to emulate Pele heyday as they wait to face either Velez Sarsfield or Penarol in South American finale.