Lorenzo was in second place when he crashed out on the eighth of 20 laps, seconds after Yamaha teammate Ben Spies also fell.

The heavy rain then accounted for Honda rider Marco Simoncelli on the 10th lap of the 5.9km course, with the Italian looking threatening in third place before skidding out.

“It was really tough conditions,” said Stoner, the 2007 world champion who was starting his 150th Grand Prix in all categories.

“Anything could have happened. We were quite lucky in this one that I stayed up and that Jorge had a crash.”

Stoner’s win lifted him 18 points above Lorenzo in the overall standings.

Italy’s Dovizioso stayed third but trimmed the gap to Lorenzo to 15 points with a third of the championship gone. 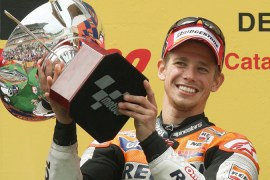 Australian storms to victory to close the gap on Jorge Lorenzo at the top of the MotoGP standings. 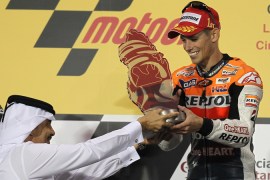 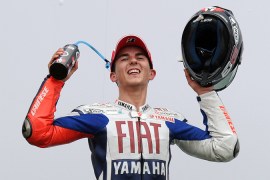